Confessions of a Hedgehog Collector

Posted on April 18, 2016 by dispatchesfromtheformernewworld 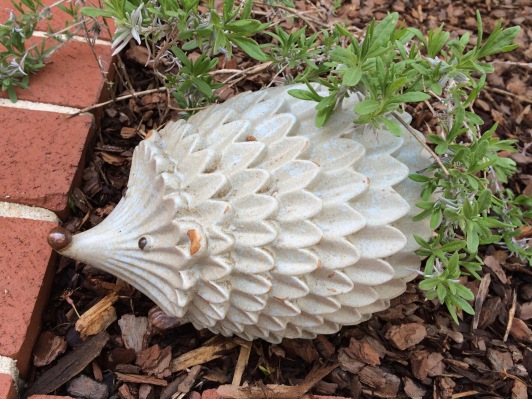 My obsession with hedgehogs began with the gypsies. Every summer when I was a child the gypsies, in their colorfully painted caravans, made camp in a nearby field. We would creep through the trees to spy on them playing explorers encountering an exotic tribe, to use the imperial language that still lingered on in Britain long after the Empire’s sun had set. Until the coming of the gypsies my Belgian mother was all the “diversity” we had in our east of London Cockney neighborhood. The gypsies brought with them an edge of danger and enticement well expressed in the folk song we sang in school, The Raggle Taggle Gypsy O, about a Lady of the manor who leaves her newly wedded Lord to run off with a handsome gypsy. We knew nothing of the real history of the Romani people of course, so rumor and tall tales held sway. That is how I learned that the gypsies ate hedgehogs for dinner. Reportedly they smeared the hedgehogs in a thick layer of clay to cover the prickles and roasted them in an open fire. Now memory can play strange tricks and, though I remember this vividly, I do admit it could be a construct of those neighborhood tales working on a childish imagination. I remember peering through the trees at dusk and seeing the gypsy man’s large bronze hands reach into the fire and pull out a football shaped lump of clay. He broke it open and I saw the steaming, white hedgehog meat inside. I could never see one of the sweet little creatures again, and they were quite common in our garden, without thinking of this stomach-turning sight and wishing to protect them.

A few years ago I came across a book with everything you could ever want to know about hedgehogs, and more. The Hedgehog’s Dilemma by Hugh Warwick points out that they have inspired writers since ancient times when the Greek philosopher and poet Archilochus wrote: “the fox knows many things, the hedgehog knows one important thing.” Isaiah Berlin used this idea in his famous essay The Hedgehog and the Fox. The folklore of many European cultures depict hedgehogs as symbols of wisdom. And did you know that hedgehogs lived alongside dinosaurs, that the rare Chinese hedgehog is considered sacred, and that encountering a hedgehog at night is a bad omen? And just how do hedgehogs mate with all those prickles in the way? But the most interesting part of the book for me was finding that old gypsy recipe of my memory confirmed. Even among English hedgehog devotees, and they are a species worth studying in themselves, eating hedgehogs is OK so long as you eat road kill. And forget simple clay roasting; this book includes gourmet recipes such as Hedgehog Spaghetti Carbonara and Moorish Stewed Hedgehog. I can assure you that I have never tried them.

My childhood love for hedgehogs eventually morphed into a collecting hobby. Hedgehogs became for me a nostalgic reminder of the English countryside. As word of my interest spread among family and friends I began to receive hedgehogs as gifts. I have stuffed hedgehogs, tiny ceramic hedgehogs, an enormous rather hideous straw hedgehog, hedgehog watercolor prints, and hedgehog Christmas tree ornaments. I especially treasure the spikey little hedgehog ornament that my eldest grandson picked out for me himself when he was just four. But one thing eluded me for years. I could never find a hedgehog garden ornament. Whenever I passed a garden shop I would go in and look. There were always plenty of bunnies, cats and puppies, cherubs and fairies. But never a natural looking hedgehog. One year my husband promised to find one for my birthday. The day came and he handed me a pleasingly weighty package. Eagerly I tore it open and a cute little face peered out. I couldn’t help noticing the big buckteeth and, after a lengthy pause to control my reaction, I looked up at my husband. He had a smug, self-satisfied grin on his face, but I had to tell him the truth: “Honey, this isn’t a hedgehog, it’s a chipmunk!”

The poor, rejected chipmunk eventually ended up as a donation to Goodwill and, through the wonders of Internet shopping, I finally found my ideal garden hedgehog. He stands guard over a rock I salvaged from the grotto my mother built in our English garden.

Note: Part of this post first appeared as a book review on the MCPL Shout Out Blog.

This entry was posted in Dispatches and tagged Autobiography, Books, England. Bookmark the permalink.

1 Response to Confessions of a Hedgehog Collector