A Room With a View

Posted on October 11, 2018 by dispatchesfromtheformernewworld

The excited cries and yells of the teenagers echoed down the narrow, winding stone staircase and into our tiny hotel room where we were trying, unsuccessfully, to unpack without bumping into one another. We had just arrived at the Porta Rossa Hotel in Florence, a 13th century building that looked as though it hadn’t been renovated in all the centuries since. It was a kind of Italian Fawlty Towers, only with a real tower. We hurried up the stairs to find the source of the excitement. A rat in their room wouldn’t have been out of place in this medieval pile.

The year was 1994 and we were on the final leg of our Grand European Tour. We had stayed with family in England and Belgium and then traveled by train to Germany and Italy. My husband picked Munich as the city he most wanted to visit (the beer) and I picked Florence. I was influenced of course by all the English literati who had lived in and written about Florence. E. M. Forster’s A Room with a View, George Eliot’s Romola, and the poets Robert Browning and his wife Elizabeth Barrett Browning were particular favorites. Amazingly, I was able to plan the trip in detail without benefit of the Internet! In those days the Davis Library where I worked had a specialty Travel Reference collection. We had the Cook’s European Railway Timetables and many international hotel directories. I spent my lunch hours poring over the travel reference books, plotting our train journeys down to the precise minute, and selecting hotels from a guidebook series titled something like “Most interesting inexpensive places to stay in …” That is where I found the Porta Rossa. The description said there was a suite of two rooms in the tower. Perfect for us, and who wouldn’t want to stay in a medieval tower? In those pre-internet days I booked the hotels by making international phone calls and arranged our Eurail passes through a travel agent.

By the time our train drew into the station in Firenze (Florence) the teenagers were a bit tired of travel and relieved we would be staying put for several days. Our first moments in the city were not auspicious. Although it was a weekday we learned it was a special saint’s day in Italy and everything was closed, even the currency exchange office at the station. This was before the advent of the Euro so we needed Italian lira. As we started down the hill from the station a group of three oddly dressed young women suddenly swarmed around us gesticulating and shouting what sounded like a warning. The teenagers figured out first that they must be pickpockets staking out the tourist route and trying to distract us. I grabbed my husband’s arm and we all hurried away a bit shaken. The walk from the station to the hotel didn’t look far on my map, but in the burning sun and with our heavy backpacks it was challenging. It was a relief to turn into the shade of the Via Porta Rossa and see our hotel at last, its tower rising majestically above the narrow winding street.

The tower of the Porta Rossa Hotel

Once inside, Fawlty Towers immediately came to mind. There was no-one in the lobby to greet us. We wandered around for a few minutes and what we saw was not encouraging. The place was literally crumbling. Chunks of the walls had broken off and littered the floors, the grand curving staircase had a completely threadbare rug, and instead of a handrail a rough rope was strung along the wall. An ironwork grille separated the lobby from a dining room. It looked like the kind of barrier that kept medieval nuns enclosed. Perhaps the building was once a nunnery, I mused. Eventually some-one appeared to check us in and we were handed over to an incredibly ancient, cadaverous old man who wouldn’t have looked out of place on the set of the Addams Family. “I will take you to the tower” sounded like a sinister threat. We climbed the stairs for several flights to a large open room furnished with more threadbare carpet and a few sagging old couches. A door opposite the top of the stairs apparently led to the tower. Our guide produced an enormous key like that of a medieval jailer. Opening the door with a flourish he revealed a narrow spiral stone staircase, again with a rope handrail. We climbed up in single file and he pointed out our rooms. First a tiny bedroom, further up a bathroom, and further yet another tiny bedroom. We were so caught up in the features of these rooms that we did not notice at this point that the stone staircase continued on upwards. The only window in each of the rooms was a narrow slit, the kind where archers would have positioned themselves. In the bathroom I noted that the paltry supply of towels were the thickness of a dish towel and not much bigger. I had a sinking feeling that the romantic notion of staying in a tower might turn out to be very uncomfortable.

The final steps up to the room with a view

So when the children excitedly called out to us to come upstairs I had no expectations of anything positive. We reached the second bedroom and saw that the stairs continued on up. The children’s voices were coming from above. A few more turns of the stair and we suddenly emerged into a light-filled room at the very top of the tower. Four large windows on each wall gave us a full 360 degree panoramic view over the city. The Cathedral of Santa Maria Dei Fiori, known as the Duomo, looked so close it was as though we could open a window and touch the dome. This was a room with a view beyond my wildest dreams. Nowhere in the description of the hotel had I learned of this bonus tower room, which was sparsely furnished as a sitting room. But none of us sat. We walked around taking in the magnificent view from every angle. Suddenly, tiredness forgotten, we were all eager to explore Florence. Our room with a view made up for all the discomforts and shortcomings of the hotel, which we now happily endured, even the dreadful cafe americano they insisted on serving us, though we begged for espresso.

Over the next few days we immersed ourselves in the wealth of Florence’s art and architecture, overwhelming and forever memorable. But I can report that none of us fell victim to the “Florence disease” we kept hearing about. Stendhal was a famous sufferer when he visited in 1817. To this day city hospitals regularly treat tourists overcome by ecstasy at all the beautiful art. The syndrome causes rapid heartbeat, sweating, dizziness, fainting, and mental confusion.

Aside from the art, I have a couple of indelible memories of Florence. One is the paucity of public restrooms at the time. A long line formed for just two toilet stalls in one of the piazzas. An aged crone in a long black dress sat at a table outside and collected the fee for using the facilities, thousands of lira, which seemed absurd. She took the money and handed out a single sheet of toilet paper to each person, all the while shouting angrily in voluble Italian. None of us tourists could understand what we had done wrong to provoke her so. 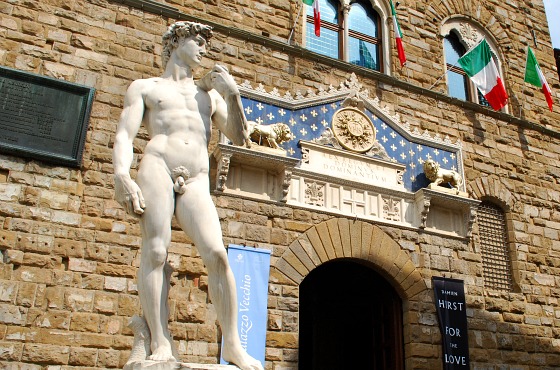 The replica of Michelangelo’s David outside the Uffizi Gallery. The original is in the Galleria dell’ Accademia

My other memory is of the day we visited the Uffizi Gallery. My fifteen year old son’s patience for art was running thin and I knew he would not want to take in the gallery at our pace. So I told him to go ahead and wait for us in the cafe at the end of the building. Needless to say when we reached the cafe he wasn’t there. But outside I spotted him right away by his bright red hair. He was seated on the ground leaning up against the plinth of Michelangelo’s David, chatting with a beautiful Italian girl. He looked completely at ease. I had the strange feeling that if I walked away and left him there he would be totally fine. I’ve thought of that moment many times over the years since I did lose him and wondered where that feeling came from. I thought I had taken a photo of him sitting there at David’s feet but I’ve searched all the albums from that trip and there is no photo. It is just that the image remains so strong in my mind.

Magical experiences like our stay in the tower can never be replicated, but I couldn’t resist searching the Internet to see if the Porta Rossa still exists. Indeed it does, but it is now a 5 Star luxury hotel. The complete renovation of the building won a European Design Award in 2010. Prospective visitors are invited “to enjoy panoramic views of the city from the Torre Monalda Suite in the tower.” But I wouldn’t exchange all the luxury in the world for the memory of our threadbare room with a view.

The renovated Port Rossa has added Grand to its name

This entry was posted in Dispatches and tagged Autobiography, Travel. Bookmark the permalink.

4 Responses to A Room With a View