On Thanksgiving and Guy Fawkes Day

Posted on November 21, 2018 by dispatchesfromtheformernewworld 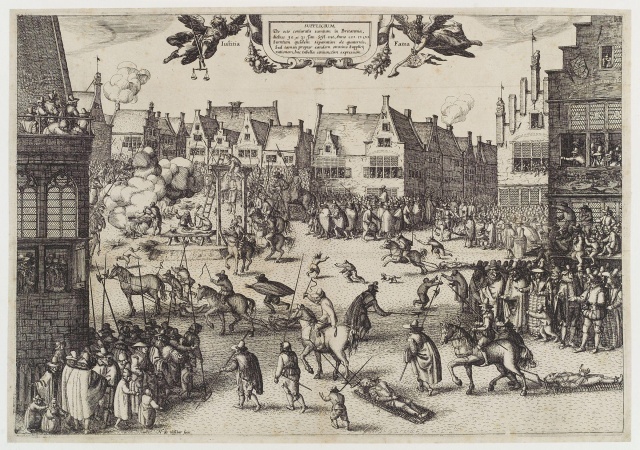 The Execution of Guy Fawkes by Nicholas Visscher

One of the oddest questions I’ve been asked since moving to the U.S. is “Do you celebrate Thanksgiving in England?” Yes, this was a real question. I resisted the temptation to answer “Yes, we celebrate that the Puritans left and took their repressive ban on dancing and merriment with them!” More tactfully I said “No, but we have our own November holiday, Guy Fawkes Day.” That met with blank stares. So I explained that Guy Fawkes was a guy who plotted to blow up King James and the Houses of Parliament in 1605. He was part of a Catholic plot to restore the true faith in Protestant England. “You mean you have a day to celebrate a domestic terrorist?”  “No, no” I hastily corrected. “We burn him in effigy to celebrate the fact that he was captured and gruesomely executed.” It really wasn’t all so merry in Merrie Olde England.

During my childhood the Fifth of November didn’t have much to do with history or religion any more. It was just a chance to light a bonfire in the back garden, set off fireworks, and eat toffee. Though we did make a guy, a kind of stuffed scarecrow figure to symbolize Guy Fawkes, and throw him on the flames. From the back doorway my Irish grandmother tut-tutted in disapproval. She didn’t think it was right for Catholics to reenact a Catholic martyr’s death. Her attitude was my first clue that the Guy Fawkes story had anything to do with religion. I later learned that my favorite firework, the Catherine Wheel, symbolized the martyrdom of St. Catherine of Alexandria in the 3rd century. Condemned to be put to death on the breaking wheel, a popular torture device of the period, she touched the wheel and it shattered. Instead she was beheaded, and ever after the breaking wheel was known as the Catherine Wheel. So we were actually reenacting the deaths of two Catholic martyrs on Guy Fawkes night!

To discover the real story of Guy Fawkes there is no better account than Antonia Fraser’s Faith and Treason: The Story of the Gunpowder Plot. As well as telling a gripping tale, this book demystifies the tangled politics and religious conflicts that the Puritans left behind when they set sail for the New World. It links the story of Guy Fawkes to the story of Thanksgiving.

Like Guy Fawkes Day the modern American Thanksgiving seems far removed from its historical origins. The oft-told tale of the pilgrims, the Native Americans, and their feast of wild turkey and trimmings is a powerful myth with little more substance than the cardboard cutout figures American children create in nursery school at this time of year. Thanksgiving was originally a religious ceremony, not connected to a particular day but held whenever a ship landed safely in the New World. The first on record was in Jamestown in 1610. The early settlers also held Thanksgiving ceremonies after a good harvest. But it was the story of the Plymouth Pilgrims and Native Americans feasting together in peace and harmony that captured the later American imagination and is traditionally referred to as The First Thanksgiving. The day didn’t become a formal National Holiday until President Lincoln declared it so in 1863 in the midst of the Civil War.

The real history behind the Thanksgiving myth is told in Mayflower: A Story of Courage, Community, and War by Nathaniel Philbrick. The truth is they didn’t really eat turkey and they weren’t really Puritans, but a different separatist group who thought the Puritans were a bit too liberal. And the peaceful coexistence between Europeans and Native Americans symbolized by that feast later exploded into the brutal King Philip’s War which marked the beginning of the end of Native American control of their own country.

Freedom from Want by Norman Rockwell

But despite the faux nature of the celebration I’ve come to love the Thanksgiving holiday and even conquer my initial suspicions of pumpkin pie. The day isn’t really about history, or pilgrims, or the founding of a nation. It’s about the importance of family. For better or worse American extended families gather for a meal, perhaps the only one they will share all year, a meal that feels like a sacred ritual, but one that everyone, regardless of religion or cultural background, can fully embrace. And for that we can all give thanks.

Note: This post is adapted from one originally published in The Dabbler on November 2nd 2011.

This entry was posted in From The Dabbler Archives and tagged America, Books, England, History. Bookmark the permalink.

5 Responses to On Thanksgiving and Guy Fawkes Day