On Memory and Churchill’s Funeral

Posted on March 3, 2020 by dispatchesfromtheformernewworld 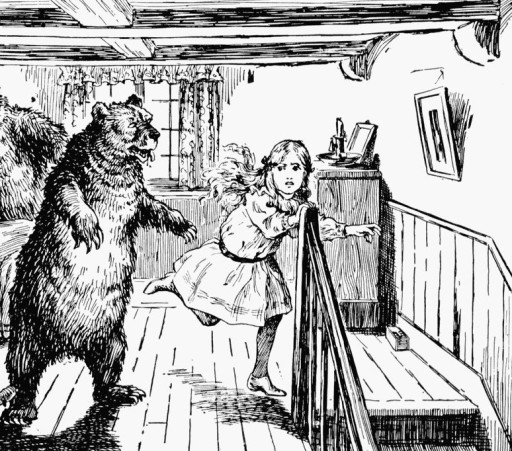 When I was very small my Uncle Lievin saved me from a bear. I was in bed at my grandmother’s house in Belgium when he came running up the stairs chased by a bear. Don’t worry, he assured me, I’ll get it. He grabbed a rifle from behind the door and stood on guard in the doorway poking at the bear as it tried to get past him to eat me up. At last, with many dramatic grunts and shouts, he drove it down the stairs and out the door. Now you’re safe, he assured me with a hug, the bear is gone. My uncle was my protector and my hero. How brave he was!

My memory of this episode is vivid. I can still almost see my uncle and the bear in mortal combat, hear his exited voice giving a running commentary on the battle. Of course at some point I realized it couldn’t really have happened. There was no bear, the growling sounds were made by my uncle, and the rifle he fought with was probably just a broom or a stick. But his acting skill was enough to convince my toddler self that I had just survived a terrible danger. It felt deliciously thrilling.

It was easy enough to debunk this false memory with the logic and knowledge of the world available to me when I was just a few years older. There are no bears wandering the streets in the city of Ghent! But I have another vivid memory, this one from my teenage years, that I believed in and repeatedly told people about until just recently. This time I was corrected by chancing upon the historical record. Not all my story is false, just one significant detail. To explain I must take you back to Saturday January 30th 1965, the day of Sir Winston Churchill’s funeral.

I don’t remember how we managed to persuade our parents to let us go, but along with two school friends, Margaret and Linda, my sister Angela and I traveled up to London by train on the Friday evening. Our plan was to secure a good position outside St. Paul’s Cathedral to view the funeral procession the next morning. We carried blankets and snacks in readiness for a cold night sleeping on the pavement.

In the years since, when I tell this story listeners assume I must have been motivated by a reverence for Winston Churchill. In America his popular image as the heroic savior of Britain in World War II is uncomplicated by the rest of his political career. In fact Churchill was no hero in our household. My father, a staunch member of the Labour Party, often spoke of the 1910 Welsh miners’ strike in the Rhondda Valley. Churchill was Home Secretary at the time and sent a cavalry squadron of the 18th Hussars to quash the strikers. Shots were fired and at least one miner was killed. Certainly Churchill was no friend to the working class. Indeed at war’s end he was tossed out of office in favor of a Labour government. No, I did not revere Churchill. It was more a sense of history in the making, the ending of an era, the chance to see a magnificent spectacle that took me up to London that night. And of course a teenage eagerness for a bit of a daring adventure. 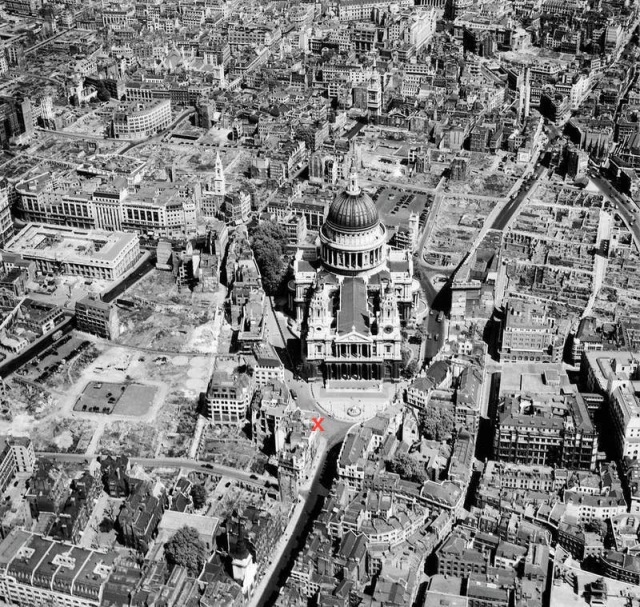 X marks the spot where we watched the funeral procession

When the four of us arrived at St. Paul’s there were plenty of people gathering already but we were able to claim a prime spot right on the corner where the roadway coming up Ludgate Hill opens out to the forecourt of the Cathedral. Our original plan was to go first to Westminster Hall where Churchill’s body lay in state. But a police officer warned us that the queue to get in was very long and if we left now we would never find such a good spot again. We were right in front against the temporary metal barriers separating the pavement from the street. I don’t have much detailed memory of how cold or uncomfortable our night was sleeping on the ground. According to one news report:

The thousands along the processional route from Westminster to St. Paul’s huddled under blankets, in sleeping bags and wrapped plastic sheets around themselves to ward off the chill wind.

For some reason people often ask me what we did about bathroom needs. I can only assume we took it in turns to seek out a public loo so as not to lose our place. I do remember a lovely camaraderie among the crowd and with the police officers, old fashioned Bobbies in those days before the age of heavily armed security forces. 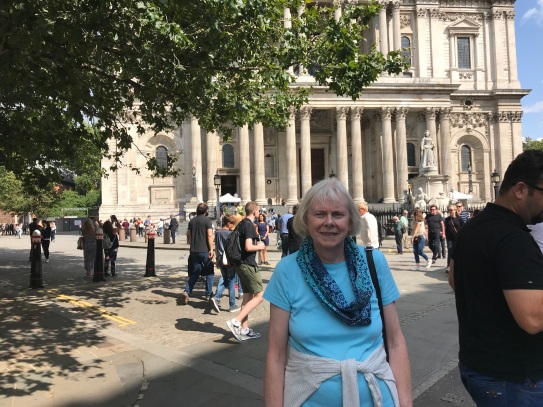 Last summer I stood on the spot where we watched the funeral procession so many years ago.

As they had forewarned, the police woke everyone up at 5:00 a.m. From then on we had to stand to make room for the new crowds pouring into town on the early trains. The funeral procession was scheduled to leave Westminster at 9:45 so we had many cold hours of standing and waiting. But there was plenty to see as dignitaries began to arrive for the service. It was right in front of us that their cars stopped and they got out to walk across the forecourt and up the steps into the Cathedral. Queen Elizabeth and other members of the royal family attended as well as Prime Minister Harold Wilson, four former Prime Ministers, and world leaders representing 110 nations according to news reports. Among those I distinctly remember seeing were General De Gaulle and President Lyndon Johnson, both so tall they towered over everyone else. I immediately recognized De Gaulle by his distinctive cap and Johnson by his craggy features. 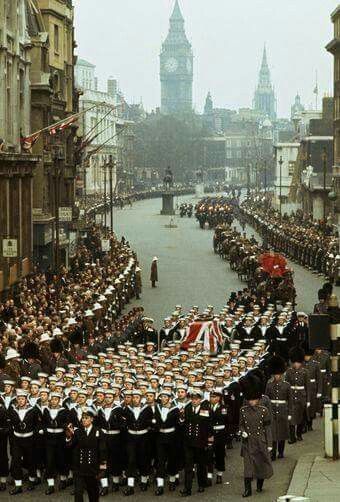 At last Big Ben tolled to mark the cortege leaving Westminster and then we caught our first glimpse of the procession marching up Ludgate Hill to the sound of muffled drums. We were part of a police estimate of a million people lining the route to St. Paul’s. Some details I remember are spectators leaning dangerously out of the high windows in the surrounding buildings and a Guardsman right in front of us fainting and falling off his horse. The crowd was completely silent. I was awed by a great sense of reverence that I had only felt before in church. This was the splendor of the British Empire in full force caught in the symbolic moment of its passing. I don’t think I had ever seen a coffin before. Despite the grandeur of its coverings it seemed impossibly small.

After the service we watched the procession leave the Cathedral and turn away from us towards the Tower. From there Churchill’s body was taken by water to Festival Pier and by train from Waterloo Station to Bladon in Oxfordshire. He was buried there in St. Martin’s Churchyard in a private family ceremony. We made our way home on a very crowded train, tired but full of stories and excitement that we had witnessed history.

That is how I’ve told the story all the decades since. Perhaps some of you have seen which detail is incorrect. I only realized it recently when I watched an episode of the TV series The Crown, the episode in Season 3 that covers Churchill’s funeral. Much is made in the plot of how President Lyndon Johnson did not attend. I was flabbergasted. Surely the script writers couldn’t change history so drastically for the sake of a dramatic story line? But so sure was I of my memory that that was the first thing that came to mind. Ever the history student I turned to contemporary accounts to find out the truth. And the truth is President Johnson was not there, even though I would have sworn on a stack of holy books that I saw him. 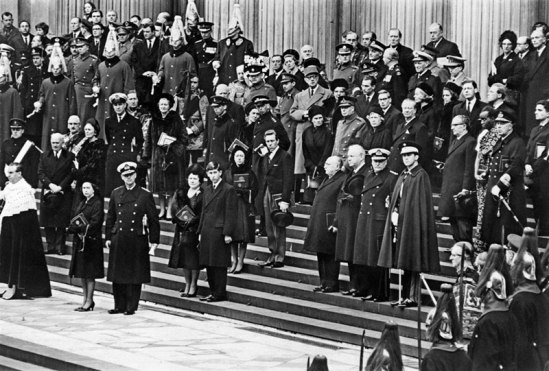 Dignitaries on the steps of St. Paul’s. De Gaulle is in the center in cap and light colored coat. No sign of President Johnson.

The truth is much as depicted in The Crown. According to a 2015 New York Times article by the presidential historian Michael Beschloss, Johnson was taken to Bethesda Naval Hospital with a severe respiratory illness on the day before Churchill died. He was still sick when he returned to the White House a few days later and his doctors forbade him to fly. Normally the Vice-President would go instead, but Johnson did not send Hubert Humphrey. This was a controversial decision on both sides of the Atlantic. Beschloss explains:

The American delegation to Churchill’s funeral would instead be led by Chief Justice Earl Warren. Some British officials called the president’s refusal to send his No. 2 a deliberate affront. (One far-fetched interpretation was that Johnson, an old F.D.R. acolyte, was paying Churchill back for his failure to attend President Roosevelt’s funeral in 1945.) Reporters badgered Johnson’s press secretary to know why L.B.J. would not send Humphrey. Was Johnson already trying to set the tone for Humphrey’s vice presidency by keeping him from raising his head above water? In his memoirs, Humphrey said Johnson’s decision “opened a small wedge between us.”

There you have it. My memory is false. But I am not the only one who believed Johnson was there. Months before I discovered my error I renewed a correspondence with my friend Margaret. We reminisced about our teenage adventure and she wrote:

The security, compared to today, was absolutely non-existent!! Lyndon Johnson and de Gaulle were standing next to each other on the steps of St Paul’s. One gunman could have wiped out nearly all the leaders of the western world, in less than 2 minutes!!

She has also been telling the story her whole life. Presumably we were pointing out famous people to one another and created a group delusion. My sister Angela doesn’t remember this detail but perhaps somewhere our friend Linda is still telling the flawed version of our story.

The question remains, who did we see? Someone who looked remarkably like President Johnson certainly. I thought I recognized his profile from newspaper photos and television news. I’ve pored over online photos of the funeral but so far Johnson’s doppelganger is as chimerical as the infamous bear of Ghent.

This entry was posted in Dispatches and tagged Autobiography, England, History. Bookmark the permalink.

4 Responses to On Memory and Churchill’s Funeral