Fons Americanus – Art For This Time

Posted on June 10, 2020 by dispatchesfromtheformernewworld

I wasn’t sure what I was looking at. Viewed from the top of the long sloping floor of the former power station it looked like an enormous tiered wedding cake. Perhaps it was the effect of the bland white surface that brought cake frosting to mind. The sculpture stood at the far end of the cavernous Turbine Hall in Tate Modern, where on previous visits we had seen other art installations, none particularly memorable. This would be different. As we came closer we heard the water. The tiers formed not a cake but a fountain, water springing from the breasts of a female figure at the top. We were looking at Fons Americanus by African-American artist Kara Walker.

As the details came into focus we were silent. At the rim of the pool a chained African man in a small boat rears back in agony as sharks circle. An African child in the water swims desperately in search of safety. Molded in ashy white, the figures appear as ghosts, the ghosts of history. Fons Americanus is an allegory of the Atlantic slave trade, of the tragic history linking Africa, Europe, and America. Walker dedicated it as “a gift to the heart of an Empire that redirected the fates of the world.” 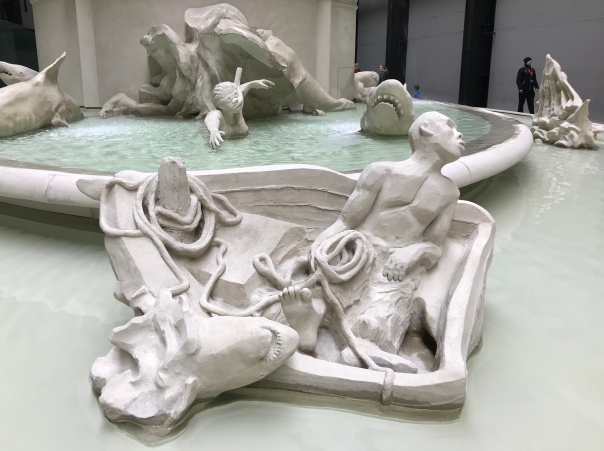 The fountain is inspired by the Victoria Memorial that stands outside Buckingham Palace. Dedicated in 1901 the Memorial, familiar to so many tourists, is an unabashed celebration of Empire. On one side Queen Victoria sits regally on her throne, the figures of Truth and Justice on either side. Fons Americanus tells another story of Empire, unacknowledged in this triumphalist version. The figure of Queen Vicky is anything but regal, head thrown back in laughter, a supplicant crouching at her feet, a noose hanging from a riven tree and a kneeling man on either side. The kneeling man is said to represent Sir William Young, Governor of the West Indies, perhaps here seeking forgiveness. The figure of The Captain is a composite of Africans who rebelled against slavery including Toussaint L’Ouverture and Marcus Garvey. The mermaids in the pool of the Victoria Memorial are replaced by drowning Africans and sharks. The figure of Winged Victory atop the Memorial is replaced by a Venus, a priestess of Afro-Caribbean religions. The water flows from her breasts and from her cut throat, representing both healing nourishment for her people and the violence they endure. Walker calls her “The Daughter of Waters.” 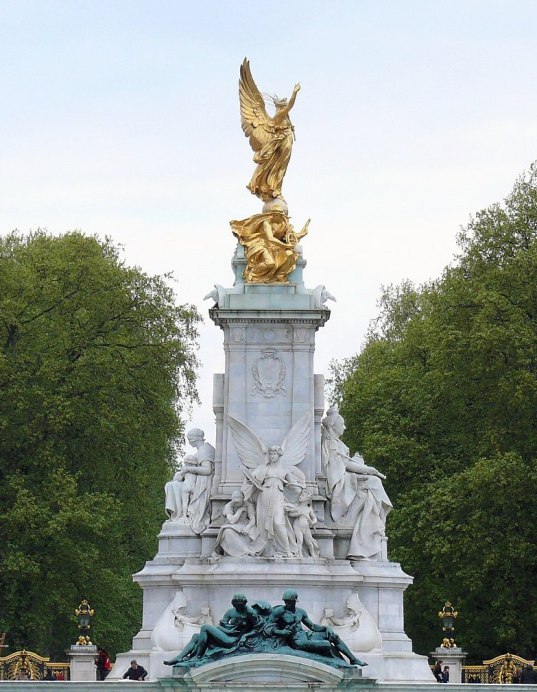 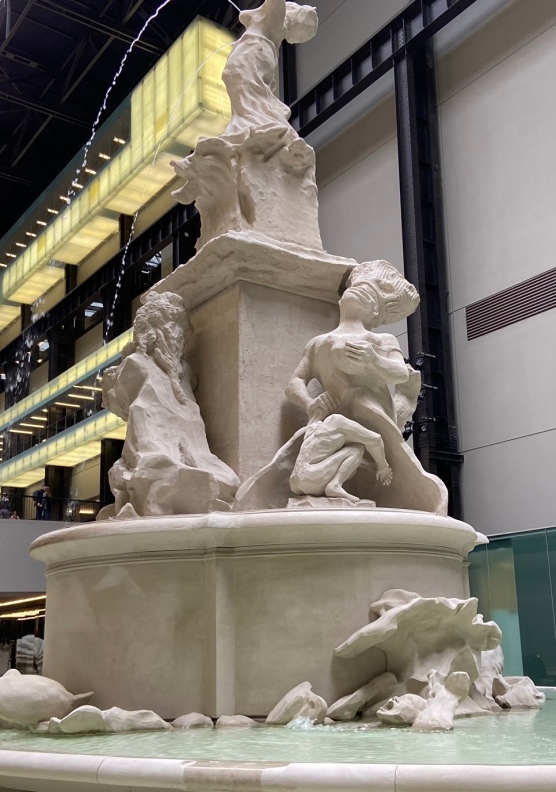 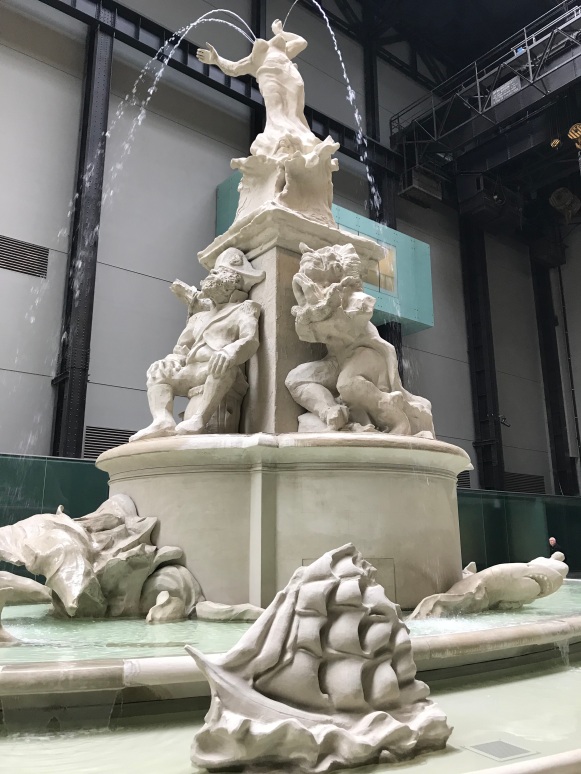 In Fons Americanus Walker references many works of art to tell her story. The figure of the chained man in the boat appropriates John Singleton Copley’s 1778 painting Watson and the Shark. Other paintings whose influence we see in the fountain are J.M.W. Turner’s 1840 The Slave Ship, depicting slavers throwing dead and dying Africans overboard, and Winslow Homer’s 1899 Gulf Stream in which an African man struggles to survive in a small boat during a storm. Walker also references a modern work, Damien Hirst’s famous (or infamous, depending on your perspective) shark suspended in formaldehyde titled The Physical Impossibility of Death in the Mind of Someone Living. Walker slyly names her sharks The Physical Impossibility of Blackness in the Mind of Someone White. 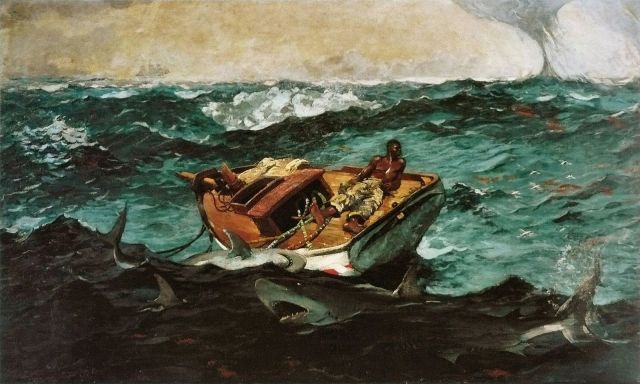 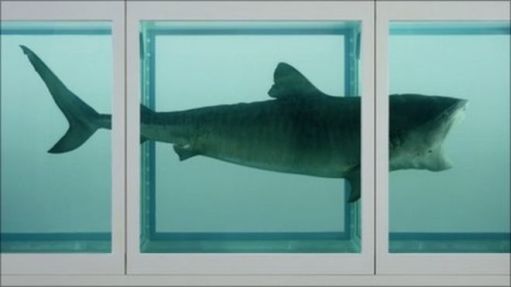 Damien Hirst, The Physical Impossibility of Death in the Mind of Someone Living

The Venus figure atop the fountain references a nineteenth century engraving that was originally used as propaganda for the slave trade, Thomas Stothard’s The Voyage of the Sable Venus from Angola to the West Indies. Here Venus is an African woman who stands on a half-shell surrounded by white cherubs. She is accompanied by the Greek god Triton who carries the British flag triumphantly across the ocean. 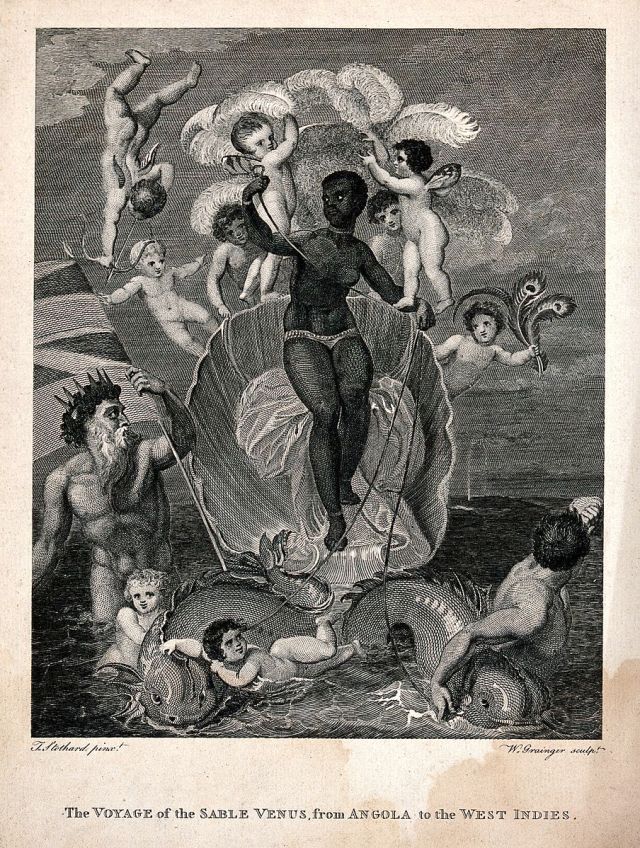 The solemnity of Fons Americanus is ironically intensified by Walker’s playfulness. Painted on the nearby wall, in her own words, is an invitation to view the work written in the style of a nineteenth century carnival barker promoting a circus attraction.

We circled the fountain several times taking in the complex arrangement of images which, if we did not yet grasp all their provenance, nevertheless tell a vivid and easily understandable story. Then we stepped back to a separate part of the work, the Shell Grotto, which we had passed by as we were drawn towards the fountain. In a half shell where you might expect to see the figure of Venus is, almost hidden within, a young boy weeping as he struggles to hold his head above water. Perhaps we were supposed to view this piece first, but it was more meaningful now we understood the historical context.

In Fons Americanus Walker uses the language of Victorian memorial architecture and painting to tell the tragic history of her people and the intertwined destinies of Africa, Europe, and America.  We are all still living with the consequences of that history, as the events of recent weeks make clear. I know I will never forget experiencing this powerful work of art. Thank you, Kara Walker.

This entry was posted in Dispatches and tagged America, Art, England, History. Bookmark the permalink.

1 Response to Fons Americanus – Art For This Time