One day in the early 1960’s I came home to find that while I was in school my grandmother had been whisked away in an ambulance and taken to a mental hospital. The news followed several unsettling days, days of half heard whispered adult conversations, days when my grandmother kept to her room and my mother placed her meals on a tray outside the door. I learned a phrase I only half understood, paranoid delusions, but somehow I knew it meant my grandmother had gone mad.

It all started one evening when our neighbor came to the door. I was doing homework in the kitchen and overheard the conversation. She explained that she waited until my grandmother would be in bed; she had to tell my parents what happened that morning while my mother was out at the shops. Nanny, as we called her, had come to the neighbor’s door, pale and trembling. She said she knew her granddaughters, my sister and I, were prisoners in that house, she could hear us crying through the wall. She knew my mother was hiding us there intending to take us away to Belgium, my mother’s home country. She couldn’t be calmed by the neighbor’s assurances that this just wasn’t true, but she submitted to being led home.

In the days that followed my mother felt she couldn’t leave the house for fear of what her mother-in-law might do next. Nanny stayed in her room crying uncontrollably for hours at a time. She no longer found comfort in praying the rosary. My father was distraught. I would learn years later that he had felt responsible for his mother’s well-being ever since he was a young boy and his father abandoned them. We were a family in crisis, only my two little brothers oblivious to the drama swirling around them. My father must have consulted with the family doctor, who made house calls in those days. Within a week Nanny was a patient at Severalls Hospital near Colchester in Essex. My father always carefully used the phrase “mental health hospital” when referring to his mother’s whereabouts. But somehow my sister and I intuited that Nanny was in an asylum, with all the gothic associations of that word fevering our imaginations. 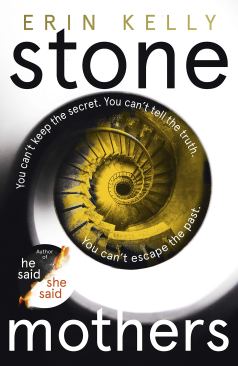 These memories flooded back as I read Erin Kelly’s new novel of psychological suspense Stone Mothers. The title was a Victorian name for an asylum, implying a place that enclosed you and kept you safe. I’ve read all Kelly’s books, delighted from the first that I had found a writer to continue the tradition of Ruth Rendell’s dark, twisty mysteries with complex, psychologically damaged characters. Her latest is her best yet, for you could hardly improve on the eerie ruins of a former asylum as the setting for a gothic tale of dark deeds and buried secrets. When they were teenage lovers Marianne and Jesse’s secret meeting place was the old Nazareth Hospital which once employed many people in their small Suffolk village. They spent magical hours exploring the ruins, still littered with old medical equipment and poignant reminders of former patients. They raced up the long abandoned corridors on a motorcycle and climbed the hazardous steps of the clock tower. But Jesse’s bitterness at the government decision to close the hospital, robbing his family of their livelihood, leads them to a fateful decision with tragic consequences. We first meet the pair, now leading separate lives, years later when Marianne returns to the village to care for her ailing mother. The past will come back to haunt them, and the reader, as the truth about what happened is gradually revealed and we experience the hospital in its heyday through the eyes of one terrified young patient.

Kelly’s writing is so vivid that as I read the chapters about Marianne and Jesse’s explorations in the asylum ruins I felt I was with them every step of the way. But something more, I had a creeping sense of recognition. I knew this place! No, I have never been in an asylum, but some time ago, while researching my grandmother’s life, I googled Severalls Hospital. Up popped haunting photos of the ruins taken by daring urban explorers like Marianne and Jesse. Severalls closed in 1997 and stood abandoned for decades, becoming a magnet for adventurous teenagers, graffiti artists, and ghost hunters. As I read Stone Mothers I realized that I had seen the fictional Nazareth Hospital, or a place uncannily like it, in those online photos of Severalls.

Severalls Hospital opened in 1913 as the Second Essex County Asylum. The first asylum, a classic Victorian gothic building in Brentwood, which still stood when I went to school there, had become too small. The county acquired 300 acres of the former Severalls estate just north of Colchester and built a sprawling complex that could house over 2,000 patients. The design was called the Echelon Plan, a concept based on the military term for a diagonal arrangement. Wards and staff areas were linked by interconnecting corridors. These corridors were so long that the nurses used to ride their bikes along them, just as the fictional Marianne and Jesse rode their motorcycle. The outer walls of the corridors had windows but no glass so they were open to the elements and flying wildlife. Sometimes the corridors echoed with screams, not from mentally disturbed patients, but from nurses surprised by bats. With residential buildings for staff and administration Severalls was like a self contained town with a population larger than that of the nearby village of Myland.

During the first World War Severalls was repurposed as a military hospital and treated many returning soldiers suffering from shell shock. In 1942 the hospital was bombed by the Luftwaffe who mistook the aerial view of the huge complex for a factory. Thirty-eight patients were killed. These facts entered the historical record, but what of daily life and medical treatment within the walls of the asylum? For that we are fortunate to have a study commissioned by the North East Essex Mental Health Trust when Severalls closed. Diana Gittins, a social and oral historian, was chosen for the project. In 1998 she published Madness in its Place: Narratives of Severalls Hospital 1913-1997. It seems she had a personal reason for undertaking this project as she dedicates the book to her mother “who died in Severalls in 1984.” For an epigraph she chose I Am by John Clare, the nineteenth century poet of rural England who suffered from delusions and died in an Essex asylum in 1864.

Based on interviews with over sixty former patients and staff as well as documentary evidence, the book is considered a model of its kind. The introduction calls it:

“an unusual and very accessible account of trends and changes in the history of psychiatry during the 20th century, while at the same time offering a lively narrative of the daily lives of those who worked and lived in a typical psychiatric hospital.”

Gittins reveals that the shocking Victorian practice of husbands and families admitting their own wayward wives and daughters into an asylum continued well into the twentieth century. Young women who engaged in premarital sex or became pregnant as a result of rape often ended up languishing in Severalls for decades, even dying there. Treatment was barely more than mere incarceration until the 1950’s when medical staff began the unethical practice of experimenting on their patients with new methods like electroconvulsive shock therapy (ECT) and lobotomy. Despite the horrors some patients had positive memories of their time at Severalls, one woman noting the healing effect of the spacious grounds where she felt free. There is other evidence of suffering, like the anguished graffiti scrawled on a wall by an unknown patient: “my wounds cry 4 the grave.” By the 1990’s when the model of mental health care changed from institutional to community care Severalls was closed. After its decades in ruins the site was sold to developers in 2016. Some of the historic buildings have been renovated into apartments and others demolished for the construction of new homes.

All this background finds its way into the atmosphere and plotting of Stone Mothers. Erin Kelly confirms that Severalls Hospital was one of the inspirations for her book, as well as Madness in its Place, the notorious Colney Hatch Hospital in London, and other asylums around the country. From these source materials and a novelist’s flair for plot, character, and language she has spun an enthralling tale.

As for my grandmother, her stay at Severalls in the 1960’s coincided with the popularity of ECT treatment. We heard that she had been “shocked” out of her delusions. The therapy would eventually be discredited as barbaric and blamed for destroying patients’ memories. But my father said it was a mercy that his mother had no memory of her illness. She seemed otherwise unaffected. But her recovery raised a new problem for my parents. Where should Nanny live now? We were a family with four children in a three bedroom house, the third not much bigger than a closet. My youngest brother was just a baby and I remember that when he cried at night Nanny would come out of her bedroom anxious and tearful that there was something dreadfully wrong with him. Her doctors agreed that the rough and tumble of a house full of children may have led to her nervous breakdown.

With the help of his cousin, a nun in Lancashire, my father found a convent retirement home where his mother would be able to attend Mass every day, her girlhood dream of becoming a nun finally realized. What’s more, the expenses would be covered by our wonderful National Health Service. There was one stumbling block, and that is probably why I remember the name of Severalls Hospital so clearly. My father received a response to his enquiry from the Reverend Mother of the Stella Matutina Home. She “regretted” that they could not take a resident whose health was so poor that she had spent time in “several hospitals.” The misunderstanding was obvious. I remember my father put his head in his hands with frustration. Then he pulled himself together and  wrote a letter explaining that it was just one hospital, named Severalls. In due course Nanny moved into her new home, a lovely old mansion by the sea in Lytham St. Anne’s. Every summer we had a seaside holiday to visit her. The quiet life with the nuns suited her and there were no more delusions. My father was always grateful to Severalls Hospital for her care.

8 thoughts on “Tales of the Asylum”

Leave a Reply to A Librarian Opines Cancel reply