Strictly speaking this book is no longer on my bookshelf, though for many years it lived with a collection of old children’s books in my daughter’s former bedroom. Back in the 1980’s when my children were small my mother brought it with her on one of her visits from England. I assumed, wrongly as it turned out, that she had permission to give it away. The truth came out quite by chance.

A couple of years ago my brother Paul (aka Frank Key the creator of Hooting Yard) visited me for Thanksgiving. As I drove him to the airport for his journey home the subject of Rupert Bear randomly came up in conversation, as such things are wont to do when we are together. “I don’t know what happened to my Rupert Annual,” lamented Paul, “I’ve searched for it for years.” I hated to speak ill of the dead, but I had to confess our mother’s nefarious scheme to spirit Rupert out of the country and into the hands of her grandchildren. “I think I have it,” I said. If there had been time I’m sure my brother would have insisted we turn back to the house so he could recover his beloved book at once. The next best thing was my proposal to email him a photo of the cover so he could verify if it was indeed the Rupert Annual he remembered. If so, I promised to return it. The answer came yes, it was his 1964 Rupert Annual, now offered for sale online at prices over 100 pounds. Of course its value to my brother could not be measured in monetary terms.

Rupert Bear began life as a Daily Express comic strip in 1920 and the first Annual came out in 1936. The original creation of Mary Tourtel, it was taken over by Alfred Bestall in 1935. He illustrated Rupert and his world for thirty years, until he was well over ninety, giving us the now iconic image of Rupert with his red sweater, yellow checked trousers, and matching scarf. Rupert lives in the idealized English village of Nutwood and, like the Hobbits of the Shire, leaves the safety of his home for adventures in faraway exotic lands. Bestall also devised the classic Rupert story format. The comic strip illustrations have no speech bubbles. Instead the story is told underneath in rhyming couplets and beneath the verse there is a longer prose version. This makes the books ideal for children of all ages. I always enjoyed reading the verse to my children when they were very young, and later on they could read the longer stories for themselves. 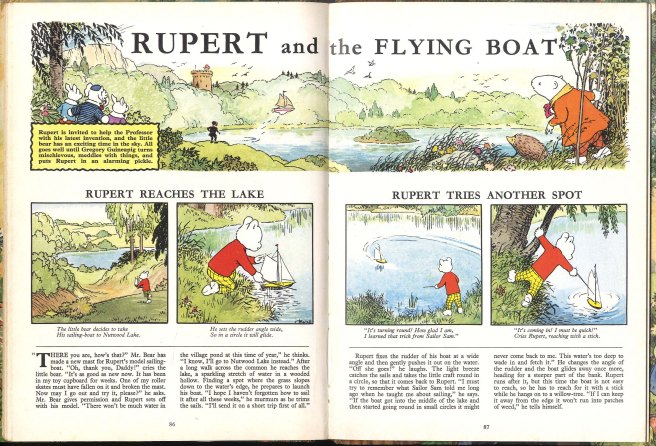 The world of Nutwood includes both animal and human characters. Rupert’s animal pals include Algy Pug, Podgy Pig, Ferdy Fox, and my personal favorite, Bill Badger. The humans of Nutwood have come under modern day criticism as stereotypes, especially the Chinese girl Tiger Lily with her “conjuror” father. But it is the settings of some of Rupert’s adventures that have caused most controversy. The imaginary magical lands he visits include Coon Island inhabited by people known as little “Coons” illustrated in an extreme racially stereotypical style. (Thankfully the 1964 Annual stories take place in other locales or I could not have read them to my children). Indeed, while most of the Rupert stories are innocent and charming animal adventures, they do reflect the times in which they were written. It is easy to see Rupert as a typical English public schoolboy of the era heading off to foreign lands with unquestioning imperialist and colonialist attitudes. But lest we get carried away, as a recent writer in The Guardian did calling Beatrix Potter’s work “a primer for navigating the merciless currents of amoral capitalism,” let us remember that they are stories about an imaginary bear.

Of course I had to return the Rupert Annual to its rightful owner but I found it surprisingly difficult. Rupert was part of my childhood too. Perhaps his adventurous spirit rubbed off on me. Like Rupert I left the safety of home for a faraway exotic land, America. There I read his adventures to my children who fell asleep to the soothing cadence of rhyming couplets. Before Christmas I got out the special Bodleian wrapping paper I keep for gifts of books (seen below). I carefully wrapped the Rupert Annual after slipping the following poem inside. As befits the subject I wrote it in rhyming couplets and if sometimes the rhymes are a little strained, well they are in Rupert too, that’s part of its charm. (At least that’s my excuse).

A Valediction for Rupert

Oh Rupert! Since we needs must part
I wrap you in compelling art

Of books beloved from long ago,
Their whereabouts I do not know.

Like you they may have flown away
Without permission I dare say,

And sit now on some distant shelf
Unloved, neglected, by themself.

Dear Rupert you were never lost
But treasured, read, and tossed

About by little ones who loved you too
Just as much as Paul must do.

Safe journey home where you belong
And think of me, I shall be strong

And shed no tears as you depart
For books can live within the heart.

Rupert was warmly welcomed home and in reading it again my brother realized how much it had inspired his own imaginary world:

“How thrilled I was this morning to unwrap my sister’s Christmas gift – the treasured book from my childhood. And how astonished I was, leafing through it, to realise how much of Hooting Yard is there in embryo. Weird countryside, picnics, entanglement in bracken and thorns, eerie mists, aquatic sea beings. . . all this stuff must have entered my head long, long ago, and nestled there.”

2 thoughts on “On My Bookshelf – Rupert Bear”