Posted on June 2, 2016 by dispatchesfromtheformernewworld 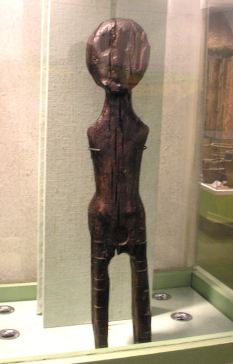 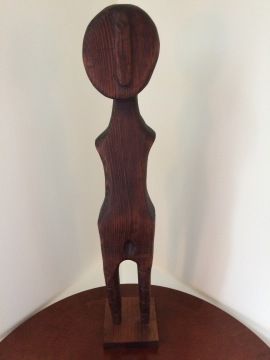 A few years ago I received a mysterious Christmas gift from my San Francisco brother. I opened the long, narrow box to find a crudely formed human figure made of wood. It looked like something you would find in the “exotic” home décor aisle at Pier 1 or World Market, along with the carved elephants and brass Buddhas. Standing 18 inches tall the figure was armless with a disc shaped head, a rudimentary nose, and a single eye. Just above the legs a round hole was an ambiguous indicator of gender. I stared at the figure for some time wondering what on earth my brother was thinking sending me such a strange object. I really didn’t know what to do with it so I stuck it behind a plant on my bookcase, well hidden from view.

On Christmas day my brother phoned and, after the customary season’s greetings and enquiries after the family, he asked if I had received his present. My cautious answer and muted thanks must have revealed my puzzlement. “You do know what it is?” he challenged. “No,” I answered with the creeping sense that I was supposed to be thrilled with the weird gift. “It’s a replica of the Dagenham Idol,” he replied. I had never heard of the Dagenham Idol but at least now I could see the relevance of the figure to my family and especially to me. I am the only one born in Dagenham, in the house at 40 Whitebarn Lane where we lived for my first seven years . When we moved it wasn’t too far away and Dagenham, along with Romford and Barking, remained part of the territory we thought of as home.

Dagenham is a town in Essex on the north bank of the Thames east of London. It has a long history, predating its mention in the Domesday Book. In modern times it is best known as the site of a Ford Motor plant (featured in the film Made in Dagenham). It was excavation work for the building of the plant that led to the discovery of the Dagenham Idol in 1922. It was found buried in the Thames marshland mud, a peaty substance that had preserved the pine figure for over 4,000 years. Carbon dated to 2250 B.C. in the late Neolithic age, making it a thousand years older than Stonehenge, the Idol is among the oldest depictions of the human form ever found in Europe. Buried with it was the skeleton of a deer, leading to theories that it was some kind of ritual offering to the gods. Other clues point to a Scandinavian origin as pine trees did not grow in Britain at the time. It closely resembles a figure found in Broddenbjerg Fen in Denmark in 1880. Some scholars believe that the single eye on both idols is evidence that they depict the Viking god Odin. The Broddenbjerg Idol does provide an explanation for that odd hole in Dagenham’s genital area for it sports a large phallic peg inserted into the hole. Presumably Dagenham lost his phallus somewhere in the Thames mud. The exact origin and meaning of the Idol may be obscure, but as with many enigmatic ancient artifacts, the Idol came complete with the rumor of a curse.

After so many millennia of peaceful slumber the Dagenham Idol has had a rather adventurous afterlife, reportedly traveling all the way to the New World and back. It first took up residence in Colchester Castle Museum in Essex. Appropriately enough this is the town that claims to be the oldest in Britain, once the Roman capital of Camulodunum. Here it was exhibited in a glass case, a minor curiosity, until the day in November 2009 when an American citizen who had been born in Dagenham, one Nigel Bunt, came visiting. Mr. Bunt explained what happened:

“The Idol spoke to me, as soon as I saw it I felt its power, it’s hard to describe, I just suddenly felt Neolithic and I knew I had to have it.”

So he stole the Idol and took it home with him to San Francisco. At first Mr. Bunt believed that the Idol brought him good luck. His life was on an upswing, his construction business prospering, and he felt he owed it all to the Idol of his birthplace. But then the Idol turned from a lucky charm into a curse. Everything went wrong for Mr. Bunt, even his favorite football team started losing every game.

“When I came back to San Francisco strange things began to happen, I soon felt my life spinning out of control and I knew it was the power of the Idol.”

In January 2011 the San Francisco Police rescued the Dagenham Idol. A neighbor called them to report that Mr. Bunt was chanting wildly and dancing naked around a giant wooden figure in his back yard. He had carved a replica of the Idol with a chainsaw and apparently hoped that this ritual would appease whatever gods controlled it. Mr. Bunt was subdued and the Dagenham Idol returned to Colchester Castle Museum. Mrs. Bunt was left to pick up the pieces of her shattered husband.

I read versions of this story on several websites as I researched the history of the Idol. But something about it didn’t seem quite right. The Dickensian British name, the over the top details, and especially the similarity of Mr. Bunt’s life to my brother’s. Both lived in San Francisco, both owned construction companies, both were fanatical followers of English football, and both seemed to enjoy the fantastical. My brother certainly shared the family penchant for storytelling. I delved deeper into the web and found that all the versions of this story led back to a single source, a blog written by none other than a penname used by my brother! Never believe everything you read on the Internet.

Breathing a sigh of relief that I had escaped the humiliation of being taken in, I turned to the real post-discovery history of the Idol. It did move, but not so far away. Back in 1922 Colchester was the obvious place to display the Idol as Dagenham didn’t have a museum. But in 2010 Colchester agreed to temporarily loan it to the newly refurbished Valence House Museum in Dagenham. Curators there launched a petition to keep it, with the tongue-in-cheek claim that the curse of the Idol would be lifted if it stayed in its hometown. So far it remains there.

Whatever the ancient power of the Dagenham Idol, it has not been sufficient to save it from the modern curse of installation art. In 2015 the Create London project sponsored “a major new sculpture and soft play area” by Marvin Gaye Chetwynd at the Abbey Leisure Centre in Barking. The play area “envelops children in a chaotic, fantastical world of images, ancient and modern.” At the centre is The Idol: 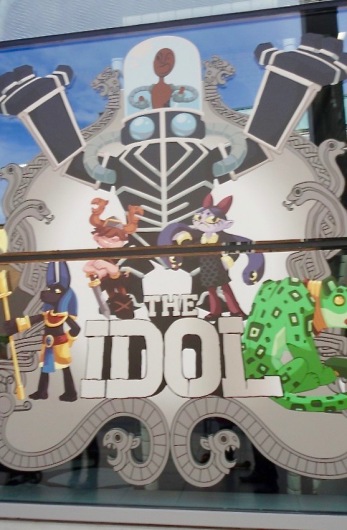 “a two-storey-high climbing frame that takes the form of a towering, cage-like robotic figure with labyrinthine chambers, ramps and levels. Children will be able to climb into the Idol’s head to look out of its two giant eyes. Part machine and part totem, it takes inspiration from the Dagenham Idol.”

In another artistic venture the Mobile Museum project, which tours housing estates in the borough of Barking and Dagenham, stopped in at Valence House in 2015 with a Make Your Own Dagenham Idol workshop. No dangerous woodworking tools for the children; the Idols would be make out of clay while the children were encouraged:

“to think about what an idol or votive sacrifice for the borough in 2015 would and could look like.”

While we contemplate what the thoughts of the children might have been on that subject let me get back to my brother’s gift. In that Christmas day telephone conversation he explained that he had hand carved four Idol replicas, one for each of us siblings. His first effort, which he said came out a bit like the Leaning Tower of Pisa, he generously kept for himself. I thanked him profusely for the thoughtful gift, which obviously represented hours of painstaking work.

How the value of an object can change once you know its provenance! The carving I had hidden away as a weird World Market type knock-off was transformed in my eyes into a precious family heirloom, the work of dedicated hands, rich with history and meaning. As soon as I put the phone down I retrieved the Dagenham Idol from its hiding place. I carefully positioned it in a prominent position on a corner table of my living room. It presides there still, the beneficent spirit that watched over my birthplace.

This entry was posted in Dispatches and tagged Autobiography, England, History. Bookmark the permalink.

1 Response to The Dagenham Idol