I learned some shocking information this fall. It was a simple matter of spitting in a tube for one test and swabbing my cheek for another, but the results were complicated and confounding. I learned that the majority of my DNA is English. As the woman in the TV ad says about her Native American ancestry, I had no idea.

If there was one thing I was certain of in life it was that I am half Irish and half Flemish. My Irish grandparents immigrated to Manchester, England from County Mayo in the west of Ireland in the early 1920’s. My father was the first generation born in England. On my mother’s side I am the first generation born in England. My mother was from Ghent in Flanders, the Flemish-speaking region of Belgium. My parents met when my father was stationed with the British army in Ghent after the liberation. They married when the war was over and my mother immigrated to England where I was born in Dagenham, Essex in 1948. So the family roots in England are very shallow indeed. We barely touched down for one generation. As far as I knew my ancestors stretched back into the mists of time in rural Ireland and in Flanders. They were farmers and working people, not of a class that would have traveled widely and mixed up their genes with people in far-flung places.

I thought I knew who I was, so I was not a typical customer for the heavily advertised DNA ancestry tests. The ads must work in an insidiously subliminal way. How many times have I seen the annoying man in lederhosen who finds out he should be wearing a kilt? By the way, he looks equally ridiculous in both. But there is a fanciful family legend, which I decided to put to the test. Both sides lay dubious claim to a Spanish heritage. Flanders was ruled by Spain as part of the Holy Roman Empire in the sixteenth and seventeenth centuries. My mother often told the story of how her father would point proudly to his nose and say it was proof that he was descended from the Spanish rulers of Flanders. And in the west of Ireland the dark-haired so called Black Irish are said to be descended from the Spanish Armada sailors who were shipwrecked there in 1588. My grandmother had naturally dark hair, which she maintained with henna in middle age. Perhaps I would find out I’m Spanish and I could trade my Irish shawl and Flemish lace for a mantilla.

So I sent off for the ancestry.com kit, spat into a test tube, and awaited my results. I was completely confident it would show approximately up to 50% Irish and up to 50% Western European with perhaps a dash of Iberian Peninsula and Viking. I could not have been more shocked to learn that the greatest proportion of my DNA, 42%, is from Great Britain, excluding the Celtic outposts of Scotland and Wales. I am Irish thank goodness, but only 37% and that includes an unknown amount from Scotland and Wales. The test accurately identified the Province of Connacht as my ancestral home. But in another shocking revelation I am only 15% Western European. I have just a smidgen from Iberia, puncturing the family’s Spanish myth, and the tiny bit from Scandinavia probably means I’m not the result of a long ago Viking raid.

But what happened to my Flemish heritage? I had to brush up on my understanding of DNA and heredity to wrap my head around these results. I got 50% of my DNA from my Flemish mother but only 15% of it was Western European. So my mother was part English? I find this very confusing. My mother looked classically Flemish. You can see her face in many of the great Flemish paintings of the late medieval and early Renaissance periods, the long elegant nose, round cheeks, and hooded eyelids. Sometimes she is the Madonna, sometimes an angel, sometimes you can pick her face out from a crowd scene by Bruegel or Van Eyck. Perhaps history provides an answer to the conundrum. In the Middle Ages England and Flanders had a very close trading relationship. Ghent was one of the Flemish cities famous for their weaving industry, which was supplied with wool from English sheep. Perhaps an English sailor docking his barge on the wharf in Ghent met and married a Flemish girl and decided to stay in the vibrant foreign city. Or a Flemish merchant buying wool in an English market took home an English girl to be his wife. Over time my supposedly Flemish ancestors may have passed on more English DNA than Flemish to their descendants. Another clue to the close relationship between the peoples of that time is in the development of their languages. The Middle English spoken by Chaucer is quite similar to Flemish. I was very good at reading Chaucer aloud in class because the sound of it was like the Flemish I had heard spoken around me all my life. 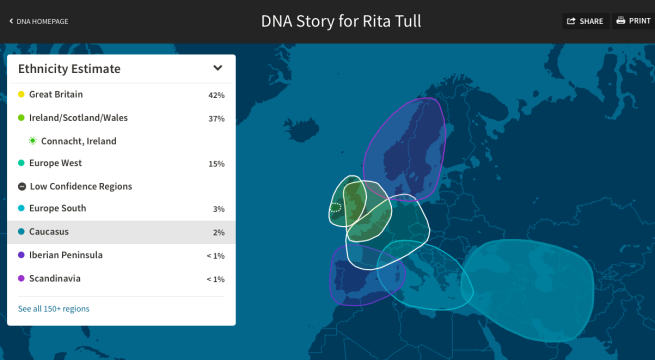 The questions raised by my DNA test results gnawed at me and I decided to verify them by taking another test with a different company. Living DNA promised to break down British DNA into 21 specific regions. So I swabbed my cheek and waited over two months for the more detailed results. If I had thought this would clear up the mystery of my ancestry I couldn’t have been more wrong. This time I got an even greater proportion of British DNA, 75%, considerably less Irish, 23%, and absolutely no Western European. The Spanish myth was debunked again. The only other thing the two tests agreed on is that I’m 2% Asian from the Caucasus. The breakdown within Britain makes me feel like the woman in the ad who thought she was Hispanic and finds out she is from everywhere, all regions. Well I’m from all regions of Britain, 7.7% from southeast England where I was born and raised, not a foreigner as I thought. I’m from East Anglia, the south, the midlands, Scotland, Wales, even bits from Cornwall, Cumbria, and the Orkneys. It is totally mystifying, especially this time a complete lack of Western European DNA. So I contacted the company to find out what explanation they would have. I was pleasantly surprised to get a lengthy detailed report from an actual person. He explained that DNA from east and southeast England is very similar to DNA from Belgium and the Netherlands so it is probably misidentified in my results. If I count those regions as really Flemish that gives me 21.8%, somewhat more than in the first test. But I am left with more questions than answers and a late in life identity crisis.

The truth is that I found it very convenient to be English, but not really. By virtue of birth and upbringing I could lay claim to all that is good about being English: the superior education, the history, the literature, the eccentricity, the weird sense of humor, the posh TV series. But when it came to the bad bits like the sins of empire I could smugly claim not to be English at all. When that stuff was going on my ancestors were peasants toiling in Irish and Flemish fields, part of the colonized and oppressed masses. It came up on our recent visit to Ireland. You can’t visit historic sites in Ireland without hearing over and over again about the brutality of English rule. At one castle, after a gruesome account of English conquest, two English women in the group actually apologized to our tour guide. I didn’t identify with them at all. It seems those days are over.

7 thoughts on “On Learning I’m English”