The Darkest Hour, The Suspect V

Posted on August 22, 2018 by dispatchesfromtheformernewworld 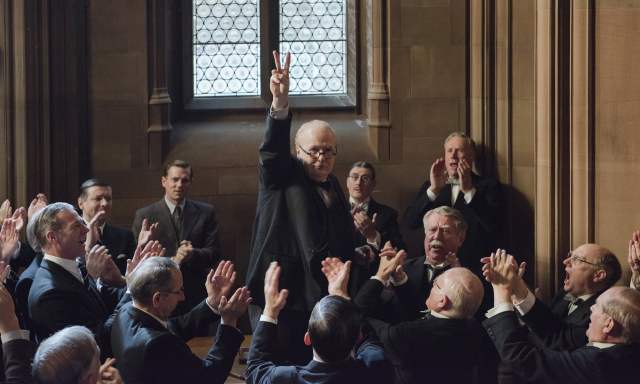 I finally got to watch the much lauded film The Darkest Hour last weekend. Gary Oldman’s performance as Winston Churchill certainly deserved the Oscar Award for Best Actor. Equally deserving were the creative group who won the Oscar for Makeup. In real life Oldman looks nothing at all like Churchill, but with an inspired combination of acting skill and makeup bravura he pulls off the seemingly impossible. Director Joe Wright brings a suspenseful “you are there” quality to the story of Churchill’s first days in office in 1940, battling with political rivals who favored a pact with Hitler and strategizing to save the British army trapped in Dunkirk. It is a “warts and all” portrait including Churchill’s excessive drinking and his controversial decision to sacrifice the garrison at Calais to buy time to evacuate the troops from Dunkirk. So far, so historical. But then came a scene I knew was an anachronism. Churchill giving his famous V sign for Victory. But that couldn’t have happened in 1940 for the V campaign didn’t start until 1941, and what’s more it was started by a Belgian!

I’ve always been irritated by historical inaccuracies in films. Perhaps that makes me a pedant or a snob. But in a time when many people get their history lessons from the movies I don’t think it’s a trivial matter. The most egregious example I can remember was in a movie about Mary Queen of Scots. It included a dramatic, emotional scene where Mary and her cousin and nemesis Elizabeth I meet in a remote castle. In fact the two queens never met. I googled to try to identify this film only to find that there are multiple movies that inaccurately bring the two iconic figures together, and a new one starring Saoirse Ronan will be released later this year. Historians are already calling it “problematic.” But screenwriters and filmmakers clearly find the temptation for ahistorical drama irresistible. 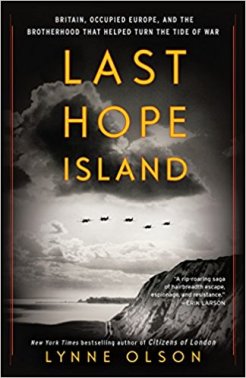 I may be alert to such glaring historical mistakes, but in truth I would never have noticed that the V sign in The Darkest Hour is an anachronism if I hadn’t earlier this year read the wonderful Last Hope Island by Lynne Olson. Subtitled Britain, Occupied Europe, and the Brotherhood that helped turn the Tide of War, Olson’s book is the inspiring story of the European leaders who fled to London to organize resistance after their countries were overrun by the Germans. They included King Haakon of Norway, Queen Wilhelmina of the Netherlands, and most famously French General Charles de Gaulle. Among them was the comparatively unknown Victor de Laveleye, the Belgian Minister of Justice. The early focus of the exiles’ efforts were the BBC European Service’s radio broadcasts to occupied Europe. Their goals were to lift the morale of the occupied populations and organize resistance groups within the various countries. The Germans banned radios but people all over Europe hid them away and secretly listened to the BBC broadcasts in their own languages. My Belgian mother told me about huddling over the forbidden radio to listen to the sound of hope.

I was surprised and proud to learn from Olson that the first successful pan-European resistance campaign, and future Churchill victory sign, was dreamed up by the Belgian de Laveleye. In an attempt to bring his divided nation together, half French-speaking and half Flemish-speaking, he came up with the letter V standing for the French word for victory, victoire, and the Flemish word for freedom, vrijheid. In a BBC broadcast in January 1941 he urged Belgians to write the letter V in chalk on buildings as a symbol of resistance. Within days the V appeared on walls, doors, pavements, and every available surface throughout Belgium. 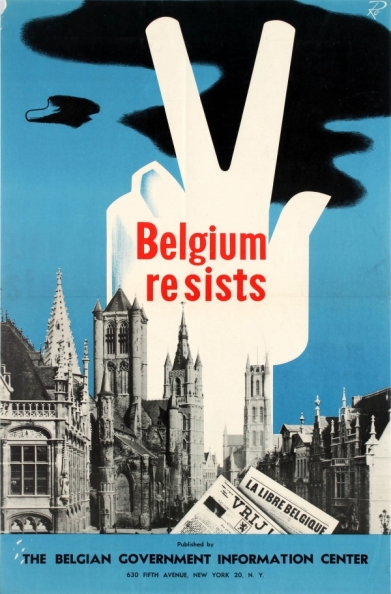 The idea quickly spread to France because the French also listened to the Belgian broadcast. Olson notes that chalk sales skyrocketed in both countries and a man in Marseilles “remarked that his city was so inundated with Vs that there was not a single empty space.” By the spring of 1941 the entire BBC European Service had taken up the V campaign. The French broadcast included a catchy song which translates as:

At the BBC someone with knowledge of Morse Code realized that the letter V, dot-dot-dot-dash, sounds like the first notes of Beethoven’s Fifth Symphony. The European Service began playing the notes on a kettle drum as their call sign. The music notes spread as quickly as the chalk Vs, or as we would say today, they went viral. Olson writes:

“People hummed and whistled them. Restaurant diners tapped them with spoons on their glasses and cups. Train engineers blasted them on their whistles. Schoolteachers called their students to order by clapping their hands with the V rhythm. When a British bomber used its landing lights to flash the letter V over Paris, its crew watched the city light up with Vs beamed back from cars and apartment windows.”

Although the United States remained neutral the V craze spread there in inimitable American style. No simple chalk signs for them, but V shaped jewelry and Elizabeth Arden V for Victory lipsticks!

Churchill was impressed with the success of the radio campaign and, according to no less an expert than his son Randolph, first made the V for Victory sign in August 1941. His advisors were aghast and discouraged him because of the similarity to the rude knuckles out “up yours” gesture. In his memoir The Fringes of Power Jock Colville writes of Churchill’s visit to Coventry in September 1941: “The PM will give the V sign with two fingers in spite of the representations made to him that this gesture has quite another significance.” But the Churchill expert Douglas J. Hall points out that as a former Harrow schoolboy and military veteran Churchill was certainly aware of the ribald meaning of the knuckles out V. The most ridiculous scene in The Darkest Hour is when a young woman, using the word ***, has to explain it to him! Churchill ignored the naysayers and made the palm out V for Victory gesture his own for the rest of his storied life. One imagines the filmmakers of The Darkest Hour, even if they knew it was inaccurate, feeling they could not portray the wartime Churchill without his defining V sign.

Meanwhile the Belgian Victor de Laveleye was forgotten, until a few pages in Last Hope Island gave him the credit he deserved. 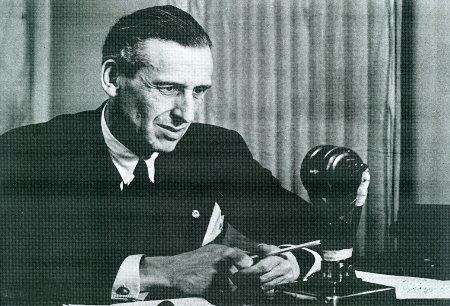 Victor de Laveleye speaking on the BBC broadcast to Belgium.

8 Responses to The Darkest Hour, The Suspect V