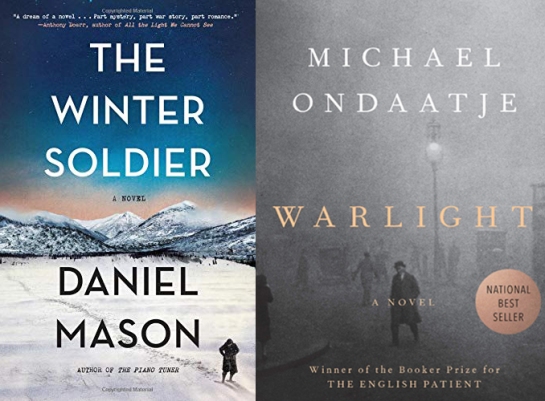 Of the fifty odd books I read this year I’ve picked a handful of favorites, all but one published this year. My two fiction choices are both beautifully written stories of wartime, one set on the Eastern front in World War I and one in London during and after World War II. I was stunned that neither of them made the New York Times or Washington Post’s Best Books of the Year list. My nonfiction choices are both histories, not surprisingly as I read a lot of history. What these have in common is that I knew absolutely nothing about the subjects beforehand and they were both revelatory. Next my favorite guilty pleasure of the year and my favorite older book discovery.

Warlight by Michael Ondaatje
I loved this book most for its haunting descriptions of wartime London, especially the strange atmosphere of blackout nights, the warlight of the title. The latest novel by the author of The English Patient is actually set in the postwar years, but it circles back again and again to wartime London. The parents of 14 year old Nathaniel and his sister Rachel disappear after the war, leaving them in the care of an odd collection of minders. Nathaniel begins to suspect The Moth and his cohort are involved in something criminal. When their mother suddenly returns things seem even more confusing. The answer to the mystery lies in the gradually revealed details of their mother’s wartime activities. Looking back from the perspective of adulthood, the warlight dissipates and Nathaniel understands at last.

The Winter Soldier by Daniel Mason
Many times reading this wonderful novel I was reminded of one of my favorite books, Dr. Zhivago; the bitter icy winter, the intense love affair, the Eastern European setting. On the Eastern front in World War I forces of the Austro-Hungarian Empire fight Russian Cossacks. Lucius is a Polish medical student living in Vienna when war breaks out. He volunteers as a medical orderly hoping to learn from experienced doctors. But he is posted to a tiny village in the Carpathian Mountains; the doctors have fled, and only one young nun, Sister Margarete, is left to care for the wounded. Margarete teaches Lucius how to perform amputations, treat infections, and sooth the shell-shocked. Despite her vows they fall in love. One winter day a soldier is brought to the church in a wheelbarrow, completely traumatized and unable to speak. He will have a profound influence on their lives. I confess I cried at the end.

The Darkening Age: the Christian Destruction of the Classical World by Catherine Nixey
Remember when ISIS destroyed the ancient city of Palmyra and posted videos of themselves attacking statues in the Mosul Museum with sledgehammers? The civilized world reacted with horror, but according to Catherine Nixey (daughter of a former monk and a former nun), this was nothing compared to the destruction perpetrated by the early Christians. Indeed many of her descriptions of mobs of black robed Christian zealots attacking the artifacts of the classical world, reducing them to dust, sound exactly like ISIS. These early Christians believed that pagan statues, altars, and books had dangerous demonic powers and must be destroyed. They succeeded in obliterating most of the classical heritage. Full of amazing stories and characters, this is early Christian history from a new and disturbing perspective.

The King and the Catholics: England, Ireland, and the Fight for Religious Freedom 1780-1829 by Antonia Fraser
I’ve spent a lifetime reading about the English Reformation and the suppression of the Catholic faith, but I was not familiar with the story of Catholic emancipation. I thank Antonia Fraser for expertly filling in a blank spot in my knowledge of English history with this dramatic account. The story begins with the Gordon riots in 1780, an outpouring of anti-Catholic violence in London that killed over a thousand people. It had the unintended consequence of spurring English Catholics to fight harder for the right to hold public office. Many English Catholics were aristocrats who could not take their seats in the House of Lords. I was not surprised to learn that they sought to distance themselves from Irish Catholics lest the association harm their cause. But in the end it was largely due to the Irish lawyer Daniel O’Connell and his surprising alliance with the Duke of Wellington that the Roman Catholic Relief Act of 1829 was passed. Among the fascinating facts I learned was that George III blamed his madness on the stress from his ministers pressing him on the “Catholic Question.” 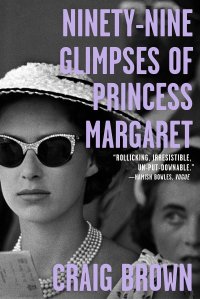 I am not normally one to read the latest royal hagiography or scandal sheet, but who could resist this gossipy collection of shocking anecdotes about the “naughty” sister of goody two-shoes Queen Elizabeth? Princess Margaret made it onto the TV screen twice this year, in The Crown, which suggested the forced end of her romance with Peter Townsend was the cause of her later bad behavior, and in the series based on Edward St. Aubyn’s Melrose novels which dramatized one of her more notorious episodes of bad behavior at a dinner party. 99 Glimpses is a very entertaining read and earns the princess grudging admiration for acting out the only way she could against her confined circumstances. Verdict: Not Guilty.

A Month in the Country by J. L. Carr

I can’t remember where I learned of the existence of this book published in 1980 and nominated for the Booker Prize, but I immediately knew it was for me. Tom Birkin is a former art student and veteran of the Great War suffering from shell shock and a broken marriage. He is invited to the remote village of Oxgodby to restore a medieval church wall painting. The Judgement scene was whitewashed over during the Reformation but a parish benefactor wants it uncovered. Birkin spends a month in Oxgodby restoring what proves to be a medieval masterpiece while the country air and hospitality of the locals restores his own spirit. Not a great deal happens in this novel which is part of its charm. Birkin gets to know the medieval artist through his painting techniques, a church organ is purchased, an ancient grave is uncovered, he falls in love with the vicar’s young wife but fails to act on his feelings, the image of a man falling into hell on the painting haunts him. Magical.