Within sight of the gleaming Shard, a forest of construction cranes, and a Victorian railway bridge lies Crossbones, a hidden corner of London history. We turn off Southwark Street into a narrow lane called Redcross Way and pass through a dank tunnel. It seems like the kind of alleyway Jack the Ripper may have favored, but this is another part of London, Southwark, south of the river. We are looking for the prostitutes’ graveyard. Opposite The Boot and Flogger pub we see a sign for our destination, the Crossbones Graveyard and Garden of Remembrance. From here all we can see is a high iron railing festooned with ribbons, plastic flowers, and all manner of memorial objects. A plaque reads “R.I.P. The Outcast Dead.” This was unhallowed ground. I see one soiled white ribbon with a name in fading script, “Elizabeth Hayes from the Workhouse.” Turning the corner to find the entrance we see only a padlocked gate with a sign telling us the limited hours when volunteers open the grounds. We will come back. Meanwhile panels fixed to the walls tell the story of this extraordinary place and I can’t wait to return to our hotel to do some more research. 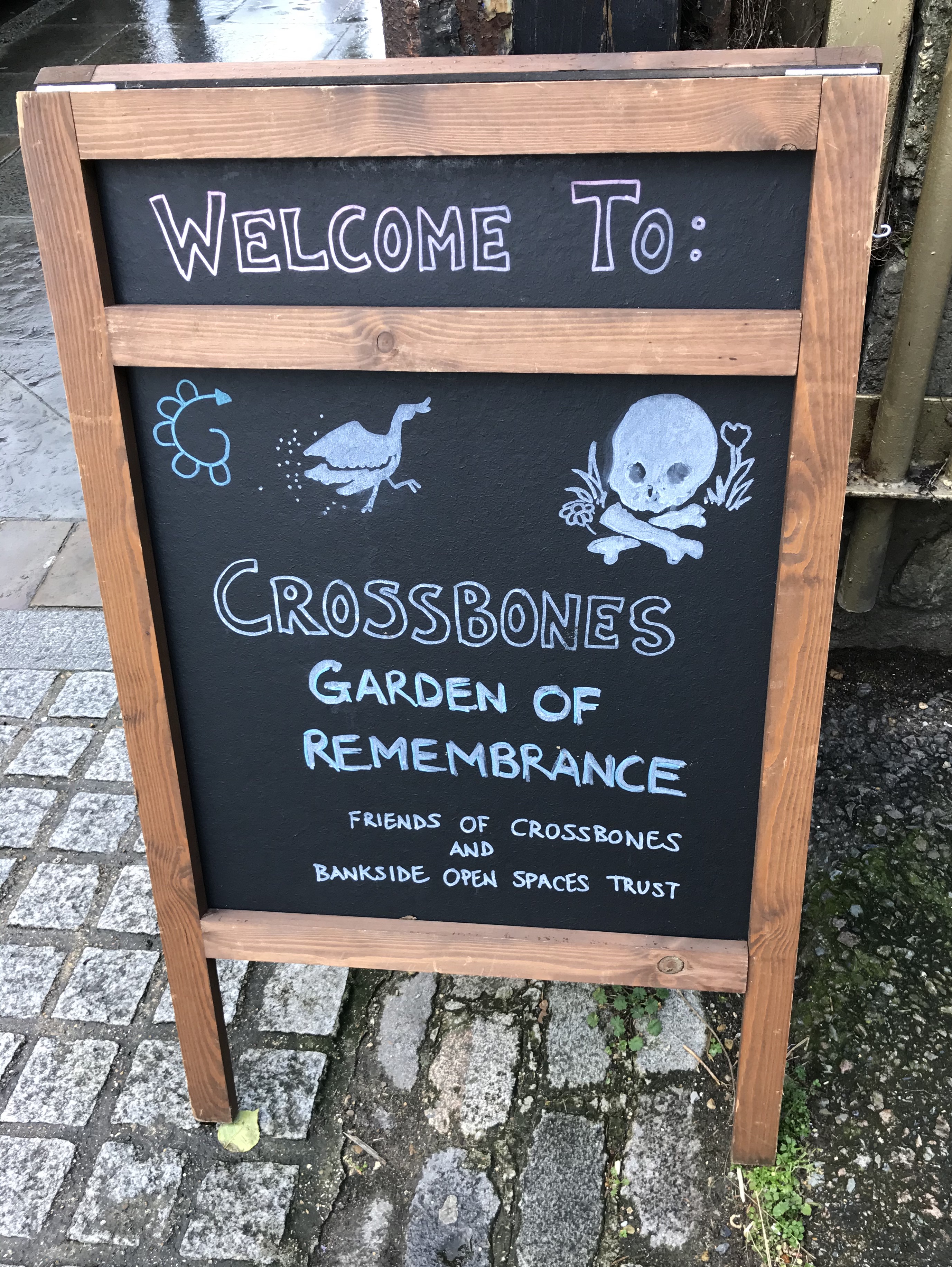 Thomas a Becket, the twelfth century Archbishop of Canterbury, is best remembered for his violent death at the hands of Henry II’s henchmen. But now I learn that in 1161 he was responsible for an ordinance of rules for the Southwark brothels at Bankside, known as stews. Among the provisions:

“a woman that lives by her body shall have free licence and liberty to come and go as she please without any interruption of the stew holder.”

Bankside had come under the jurisdiction of the Bishop of Winchester, Henry de Blois, in 1107. Because it was outside the law of the City of London the area became known as the Liberty of Winchester. But local people gave it the ironic name that stuck, the Liberty of the Clink, after the nearby prison. Henry financed the building of his residence, the elegant Palace of Winchester, with rents and license fees from the stews. The women who worked there became known as Winchester Geese in a sly nod to their connection with the bishop.

Church authorities may have regulated and profited from the prostitutes’ work, but when it came to spiritual matters they held firm. Such sinners could not be buried in consecrated ground. In John Stow’s 1598 Survey of London we find the first reference to what became known as the Crossbones Graveyard:

“these single women were forbidden the rites of the Church, so long as they continued that sinful life, and were excluded from Christian burial, if they were not reconciled before their death. And therefore there was a plot of ground, called the single woman’s churchyard, appointed for them, far from the parish church.”

This parish church is St Saviour and St Mary Overie, now known simply as Southwark Cathedral, about a ten minute walk from the graveyard near London Bridge. I must say I was quite confused by this name when I first came upon it. St. Mary Overie? Why were Mary’s reproductive organs mentioned? Surely irrelevant in a virgin birth. But I discover that the word overie is a corruption of “over the river” to differentiate the church from similarly named churches in the City of London. Nearby stand the ruins of Winchester Palace, a beautiful rose window open to the sky.

The stews of Bankside flourished for hundreds of years. In 1546 Henry VIII, known for usually getting his way, ordered the closure of the stews. But many, including one with the incongruous name The Cardinal’s Cap, were back in business by the time of his daughter Elizabeth’s reign. It was left to the repressive Puritans under Cromwell to finally close the stews in 1647, along with bear pits, theaters, and all the ungodly entertainments of Southwark, “London’s pleasure-garden.”

Crossbones Graveyard itself continued to serve as the final resting place for sinners and the poor, most buried in unmarked graves. In the eighteenth century the graveyard was preyed upon by body snatchers who sold corpses to medical schools. In 1786 witnesses reported seeing four “resurrection men” digging up a body at Crossbones and loading it into a coach. By 1853 the graveyard was “completely overcharged with dead” and closed down. The little plot of land went through various unlikely uses. It was the site of a Victorian girls’ school and in 1896 was briefly a fairground with steam-driven rides. At some point in the twentieth century it became, inevitably, a parking lot.

Eventually the land was acquired by London Transport for an extension of the Jubilee Line. But instead of obliterating the site’s history, this prompted the rediscovery of the graveyard and a local campaign to preserve it in honor of the outcast dead. London’s planning process requires archaeological investigation of building sites. So from 1991 to 1998 archaeologists worked at Crossbones removing 148 skeletons for study. They estimated that a total of 15,000 people were buried there, most of them women and children “who lived, worked, and died in what was once an impoverished and notoriously lawless part of London.” Many of the women’s skeletons bore the signs of syphilis, confirming the historical record that this was a prostitutes’ graveyard. After a long campaign the Friends of Crossbones succeeded in saving the site from development, with Transport for London leasing the land to them.

It is a typical grey London day of intermittent drizzle when we walk down Redcross Way again. This time we find the gates of Crossbones open. Two volunteer wardens are on duty to greet visitors and answer questions. But they leave us alone to explore. A covered walkway leads into the Garden of Remembrance. Later I find out that the roof of this structure is shaped like a goose’s wing in honor of the women buried here. The mood is peaceful and contemplative in contrast to the noise and bustle of the city all around. Patches of bare ground are interspersed with gardens and shrines created over the last two decades by the Friends of Crossbones and a mysterious figure known as “the invisible gardener.” There is an ad hoc feel to the place, a mixture of faiths and styles of remembrance, even a pyramid. We come upon a group of Buddha statues, each holding a globe, some wearing knitted caps. A warden tells us these are in memory of the babies buried here. A few steps further there is a shrine to the Virgin Mary. 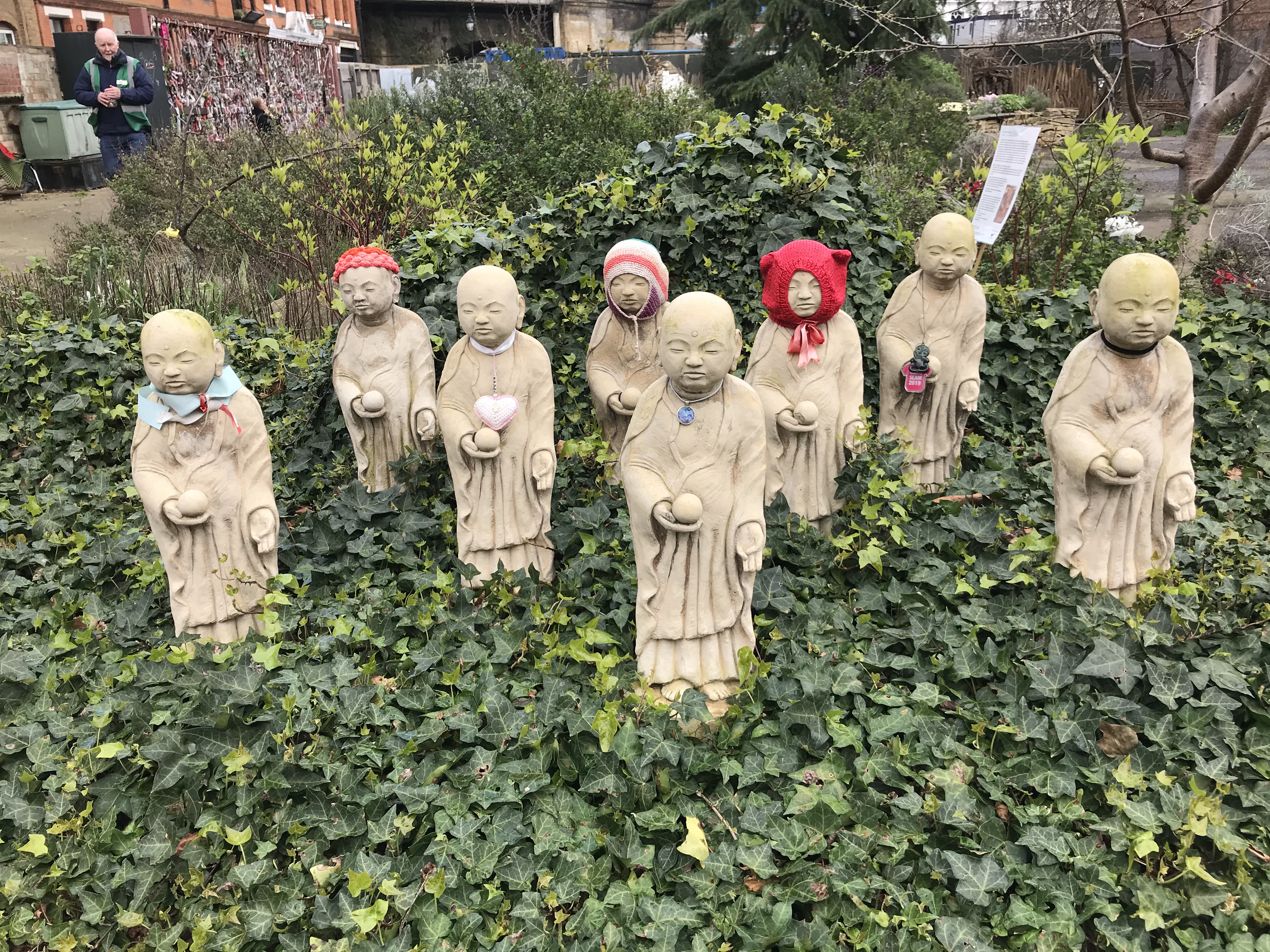 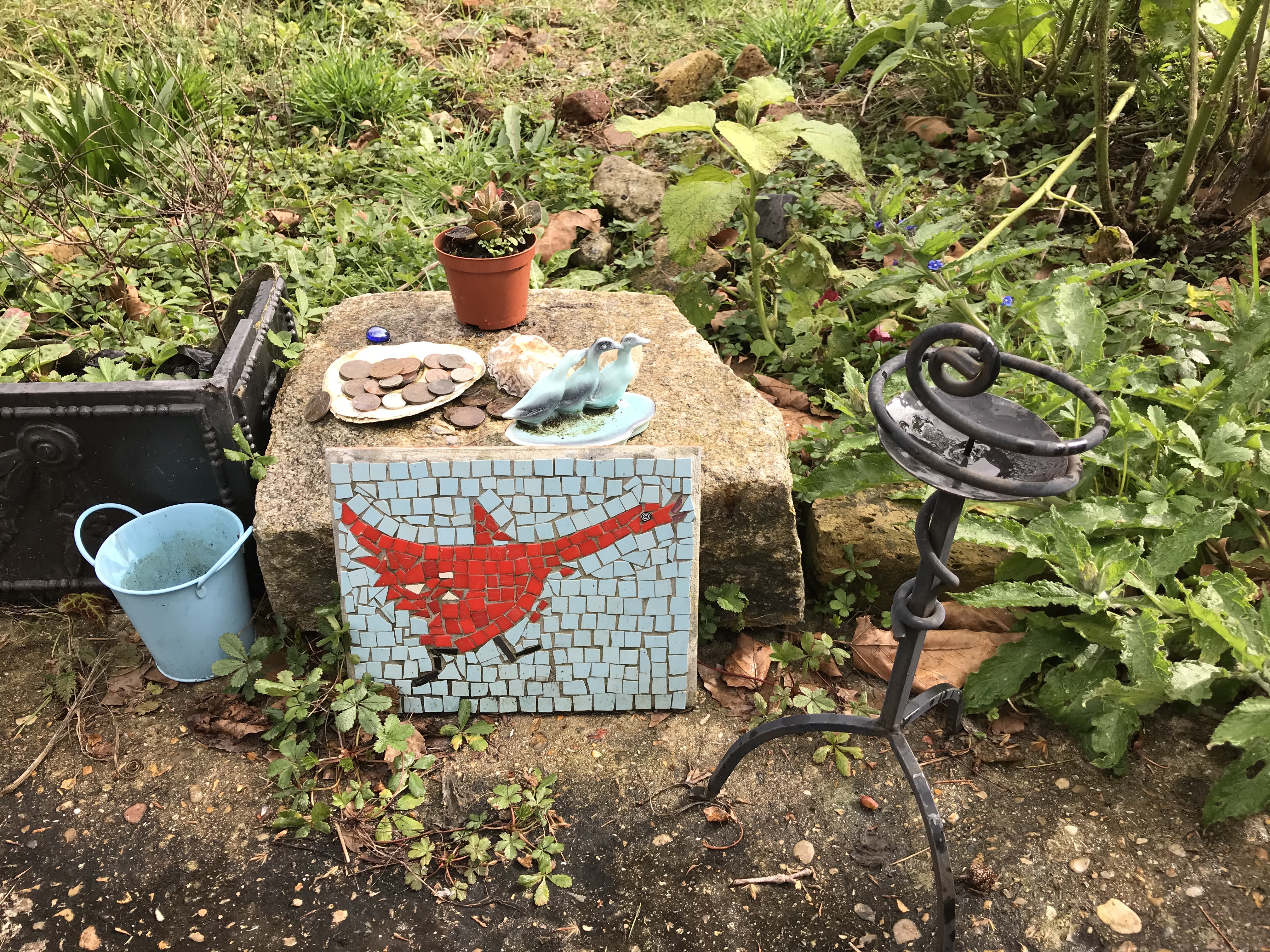 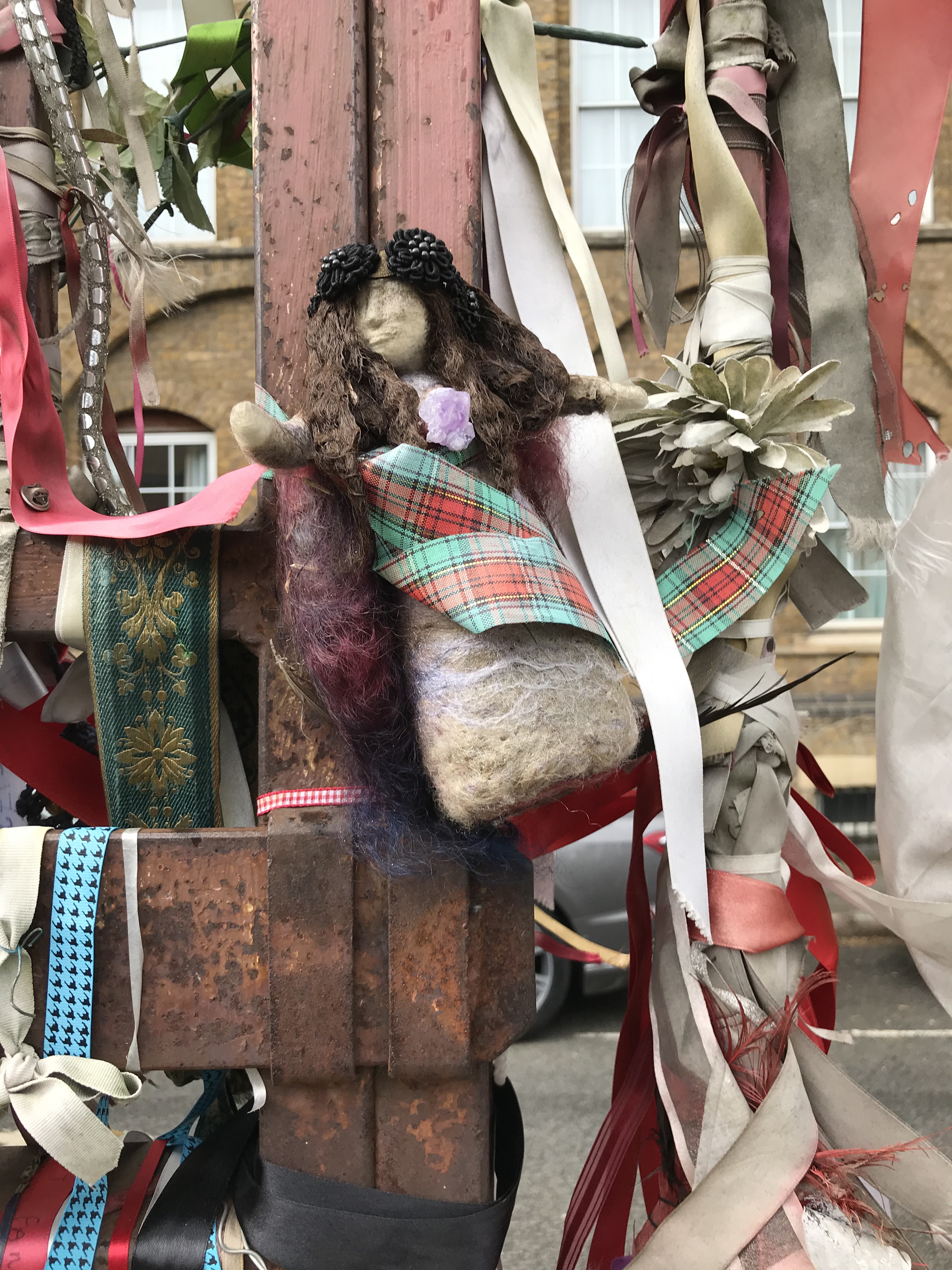 At the back of the grounds a fence displays a hand-drawn map of The Liberty and an enigmatic verse of poetry. 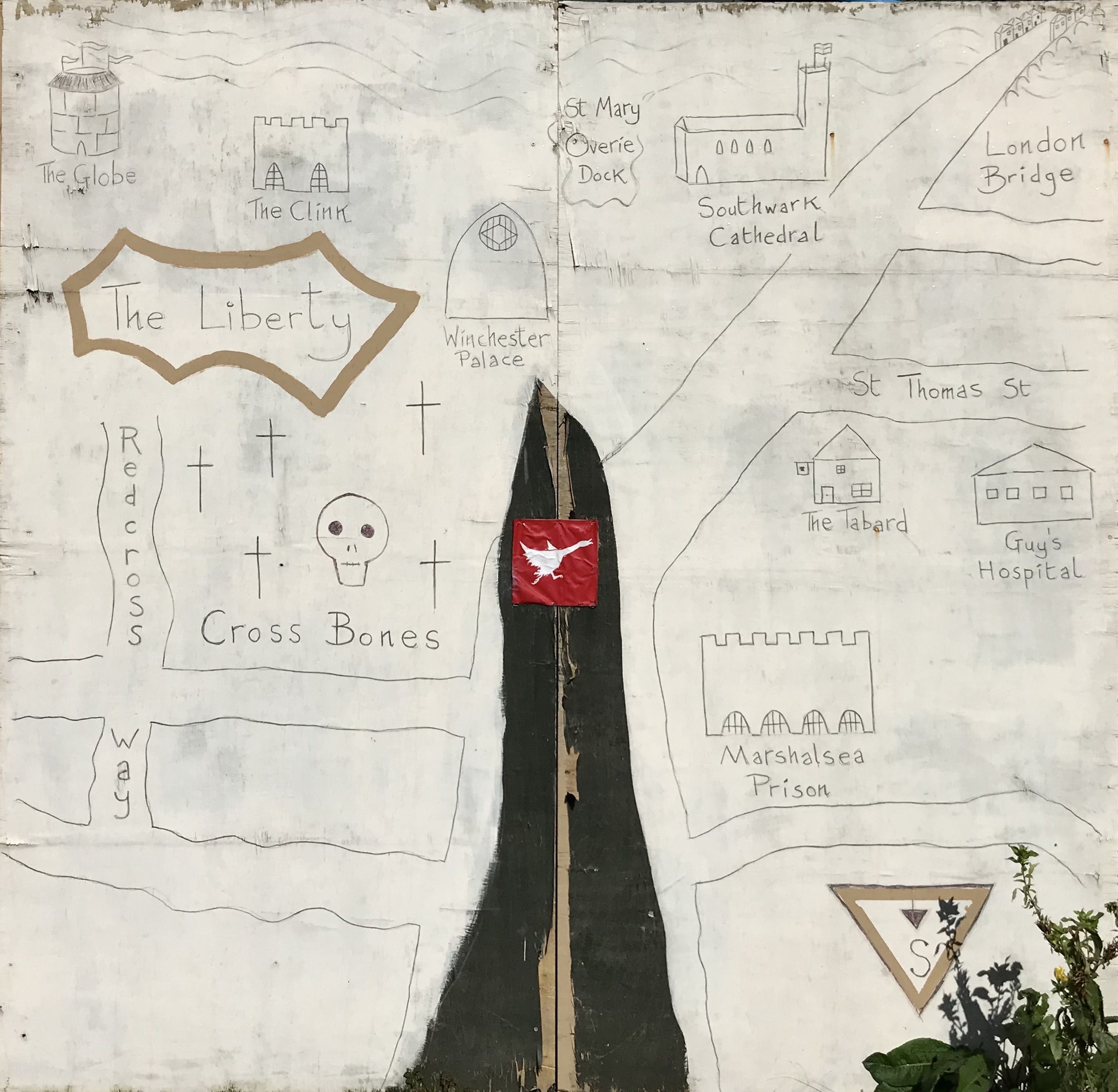 I ask the warden about this and he shows me a book, The Southwark Mysteries, a collection of poems and plays by John Constable, a local writer and founding member of the Friends. I will find that the story of this work is as compelling as the story of the graveyard itself.

It begins with a vision. On the night of November 23rd 1996 Constable was walking on St. Mary Overie Dock when he was visited by the spirit of a medieval prostitute in the guise of a goose. She led him on a walk to the gates of a desolate plot of land and sang this verse: 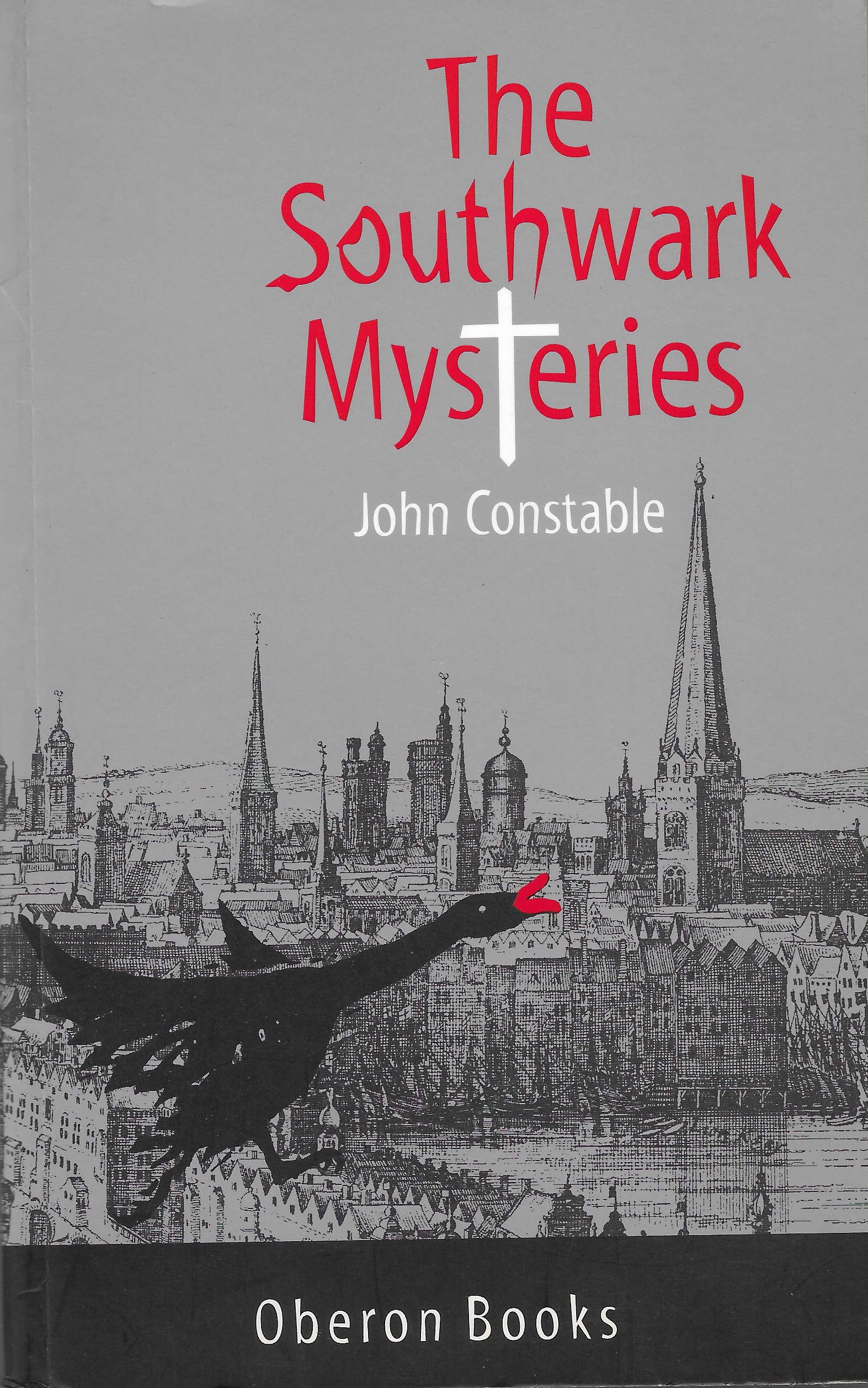 For tonight in Hell
they are tolling the bell
for the Whore that lay at the Tabard,
and well we know
how the carrion crow
doth feast in our Crossbones Graveyard.

At the time Constable knew nothing about the graveyard. In the local library he learned that Crossbones was an old name for the burial ground in Redcross Way then under investigation by archaeologists, the very place The Goose had taken him. He became obsessed with the graveyard and its history, founding the Friends of Crossbones and starting a tradition of candlelit vigils to remember the dead. The initial scrap of poetry dictated by The Goose became the cycle of poems and plays in The Southwark Mysteries. It is one of the strangest, most remarkable works I’ve ever read. The only experience I can compare it to is my immersion in Milton’s Paradise Lost when I was a student. In both works Satan is a vivid leading character. The first section, The Book of the Goose, opens with the verse I saw on the graveyard fence. The Book of the Crow opens with Constable’s account of his vision. Here are the first two verses:

There’s a bridge of stone
And a bridge of iron
Gird the dock of St. Mary Overie.
There’s a Southwark Goose
With a Crow let loose
In the Heart of the ancient Liberty.

Led him down by the Clink
Through the sweat and the stink
Of the Stews to a Bankside Oratory,
And they saw the tide turn,
And they saw London burn,
Saw it rise from the ashes of History.

The plays are modern versions of the medieval Mystery plays. Like them they marry the sacred and the profane, with familiar stories and characters from the Bible mixing with the rough and worldly. In The Second Coming, for instance, Jesus intervenes as Oliver Cromwell and his Puritan soldiers prepare to condemn Mary Magdalene in the guise of The Goose. The Southwark Mysteries play cycle was first performed at Shakespeare’s Globe theatre and Southwark Cathedral on Easter Sunday 2000 as part of the Millennial celebrations. The performance began at the Globe with the more bawdy first part while the more spiritual final act, The Harrowing of Hell, took place at the Cathedral. The Crossbones website describes the plays as “a vision of mutual forgiveness and healing divisions – between Spirit and Flesh, and between different cultures and creeds.”

Such a scene of reconciliation and healing took place on 22nd July 2015, the feast of St. Mary Magdalene. The Dean of Southwark Cathedral led a procession to Crossbones for a service of “Regret, Remembrance, Restoration.” He blessed the graveyard. The outcast dead lie in unhallowed ground no more.

More Views of the Garden 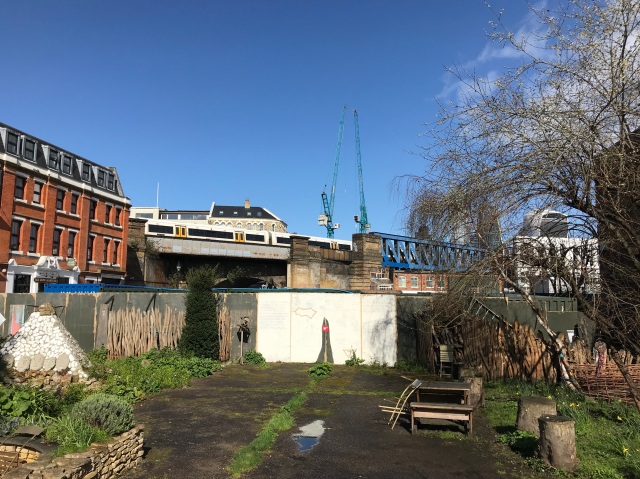 8 thoughts on “The Prostitutes’ Graveyard”