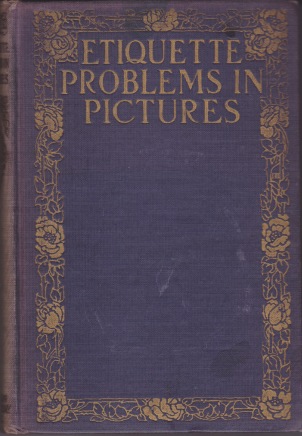 Browsing the bookshelves in one’s own home can be as adventurous as browsing in a library. Sometimes I come across long forgotten treasures, like this little book, a gift from my sister. She wasn’t hinting that I needed such a book, she assured me in her dedication:

“Do not suppose that the purpose of this gift is to indicate that you are habitually ill bred! However, with this book never again need you fear committing the inappropriate blunder.”

The book was published in 1922 by Nelson Doubleday, appropriately enough in Oyster Bay, New York, the Long Island hangout of America’s upper crust and site of Theodore Roosevelt’s home, Sagamore Hill. It reflects the social anxieties of the nouveau riche striving to fit in with the established “old money” class. For modern readers it is, in more ways than one, a comedy of manners. The author Lillian Eichler (I imagine her looking a bit like Edith Wharton) explains in her introduction that this is a supplement to her earlier volume The Book of Etiquette because she realized “the need for a picturization of the more unexpected blunders in etiquette.” But she admonishes us not to treat this as a mere picture book and neglect to read the text, for that could inadvertently trap us into committing, rather than avoiding, a blunder. She explains as follows:

For the modern reader, testing herself by looking at the pictures before reading the text, finding the etiquette blunder, or demonstration of perfect manners, is like trying to decipher a particularly cryptic code. Though viewers who payed close attention to Downton Abbey may have an advantage. In the illustration below there is obviously something wrong going on judging by the disapproving look of Monocle Man.

But is his censure directed at the ladies or the young man? It looks perfectly correct for the young man to allow the ladies to go first. But consulting the text it turns out the young man is making “an impulsive little blunder” which must have “mortified” him. His lack of experience with “social intercourse” left him unaware that the men are supposed to stay in the dining room for coffee and cigars while the ladies retire to the drawing room, or perhaps in summer the porch. One can only imagine the discomfiture of the ladies when they find this blunderer in their midst. Or will Monocle grab his arm and pull him back? Thus exposing him to embarrassment amongst the men but not the ladies, surely a lesser degree of mortification. Though judging by Monocle’s nasty expression he looks set to leave the blunderer to his dreadful fate.

This picture of a ballroom scene may look innocuous enough but actually it portrays “several mistakes which every well-bred, cultivated person will avoid.”

Apparently it is incorrect for a couple to walk across a ballroom arm in arm, and even if it was permissible the lady should be holding his arm, not he holding hers. Meanwhile the couple staring at this shocking sight are themselves committing a blunder, for “to stare at other people is both rude and inconsiderate.” (As a lifelong people-watcher I am particularly susceptible to this blunder). The rude pair are guilty of yet another blunder because, since the musicians have begun to play, they should actually have taken their positions and commenced dancing.

The dining table is a particularly hazardous setting for etiquette blunders, as this picture shows. 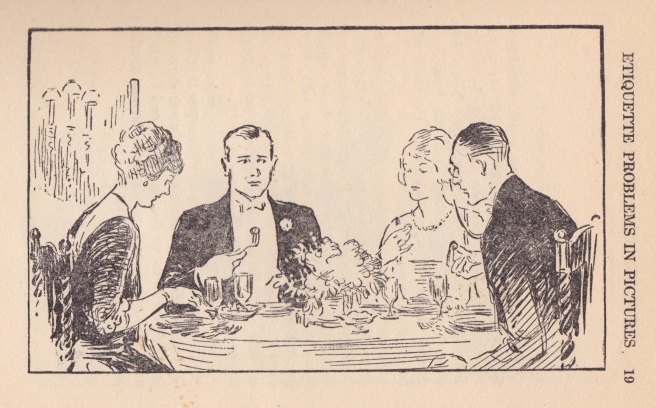 The man brandishing an olive on his fork is clearly distressed when he realizes his error. “Just a little blunder” the author admits, but enough to spoil his enjoyment of the evening. She explains the elaborate rules about finger foods, of which olives are one. There is a whole list of foods to memorize along with exceptions for certain methods of preparation and special cases like the artichoke, the leaves of which are a finger food but the heart is always eaten with a fork. This reminds me of an English friend visiting California who had never eaten an artichoke before. At the end of the meal he looked around and saw the pile of discarded leaves on everyone else’s plate. His plate was bare. He had eaten every bit. But times have changed. We did not make him feel mortified for his blunder; we admired him for his fortitude.

Each illustration in Etiquette Problems in Pictures presents an excruciating little drama reflecting a world beset with traps for the uninitiated. From the momentous – a death, an engagement, to the trivial – who should remove a woman’s wrap, the correct size for dinner napkins, it seems that wherever you turned you risked exposure as an outsider. The cumulative effect is an atmosphere of high anxiety, surely the opposite of the author’s intention.

There is little in the book to assist the modern reader, for our etiquette problems now all seem to involve our electronic devices. Is it a “mortifying blunder” to answer one’s cell phone while in the presence of a lady? Or text at the dinner table while simultaneously brandishing an olive on a fork?

But in an appendix where the author answers questions sent to her by the readers of her first book, I found this little gem. My four grandsons are obsessed with pirates so now I have a plan for my next social event.

One thought on “On My Bookshelf – Etiquette Problems in Pictures”