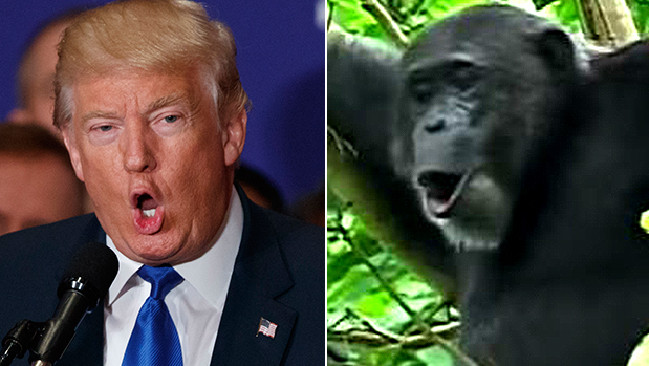 It has come to this. Among the cacophony of opinion pouring forth from editorials, blogs, columns, and endless TV chatter this Presidential Election season, the one that really seems to get to the heart of the matter comes from a primatologist. Yes, Jane Goodall, famed for her studies of chimp behavior, is now the foremost political analyst in the land.

In the October issue of Atlantic James Fallows writes that Goodall told him “Trump reminds me of male chimpanzees and their dominance rituals.” What, I wonder, made Fallows seek
out Goodall’s opinion in the first place? A primatologist is not the obvious person to consult about an election. But perhaps his thoughts were already moving in the direction that this election seems to be more about animal instinct than reason.

“In order to impress rivals, males seeking to rise in the dominance hierarchy perform spectacular displays: stamping, slapping the ground, dragging branches, throwing rocks. The more vigorous and imaginative the display, the faster the individual is likely to rise in the hierarchy.”

This is exactly how Trump behaved in primary season, said Goodall, and he particularly reminded her of a chimp named Mike:

“who maintained his dominance by kicking a series of kerosene cans ahead of him as he moved down a road, creating confusion and noise that made his rivals flee and cower.”

I haven’t seen a better analysis of the raucous noise and chaos of the Trump campaign. Judged on substance he should be failing miserably. The fact that he has risen in the polls to within striking distance of Hillary Clinton is surely due to something other than the reasoned judgment of the electorate. Many political analysts claim this is because emotions like anger and prejudice are ascendant over reason.

The Founding Fathers thought they had established a political system with a safety valve against this type of thing. Enlightenment men of reason, they feared that election of the President by popular vote would lead at best to a President chosen by the uneducated and uninformed, at worst to mob rule. In short they feared democracy itself, what Alexis de Tocqueville called “the tyranny of the majority.” Hence the Electoral College, a body the Founders envisaged in their own image: educated, land-owning white men of the Enlightenment. Strictly speaking the Electoral College members are free to vote for anyone they choose. In practice that could never happen without triggering another American Revolution. So we are left with the messy system we have today, the electorate a stew of unreason and emotion manipulated by the media and prey to all manner of devious propaganda. And in addition, according to Goodall, reacting with the animal instincts of our primate cousins.

Primates are territorial. Check, we go to war over territory just as they do. Primates are tribal. Check, we are suspicious of immigrants and anyone we perceive as “other.” Primates cower before dominant males. Human history’s long list of tyrants proves that one. So many of our problems redound to these primate instincts. Primates love to brag. A chimpanzee’s dominance display includes showing off the size of his penis. Trump has already engaged in that particular primate behavior and is an inordinate bragger. But could this be his downfall?

Here is a question I haven’t seen answered. Trump brags about his business acumen, his net worth, his charitable giving, without feeling the need to supply any evidence. But if the evidence exists wouldn’t he want to show it to put an end to skepticism and improve his poll numbers? If his tax return proves his net worth, his charitable giving, and his payment of a fair tax rate wouldn’t he be the first to want to flaunt it in the faces of the skeptical media? But he doesn’t. He tenaciously hides it. Ergo his tax return shows nothing of the sort. This is such an obvious logical conclusion I am stunned that his supporters can’t see it. But perhaps they are so mesmerized by the dominance display and the distracting chaos of those cans being kicked down the road that the question never arises.

My own primate behavior-driven tribal allegiance is to the Democrats and their standard bearer Hillary Clinton. Here is my ray of hope. While the males cower before the dominant chimpanzee’s display what are the females doing? They observe and calculate. And human females, alone among the primates, sometimes step up to challenge the male bullies and their empty dominance displays. I will watch the debates with that in mind.