As an immigrant to the U.S. from England, one of the most perplexing questions I’ve had to answer is “What is Boxing Day?” Growing up in England I never questioned why the day after Christmas, December 26th, is another holiday. It just is, in the way we take for granted the traditions we grow up with. I had some vague notion that it had to do with putting the empty boxes from Christmas gifts away in the attic, though we never actually did this ourselves. Probably because we didn’t have an attic. I also associated it with Dickens, and thought it probably originated in Victorian times. All I knew for sure is that it had nothing at all to do with the sport of boxing. So I had to do some research to come up with a satisfactory answer to American questions. It turned out to be true that actual boxes are involved, but not in the way I thought.

The origin of the Boxing Day holiday goes back to early medieval times. Traditionally it was on December 26th that
the alms boxes kept in churches to collect money for the poor were opened and the contents distributed. The word “alms” has a very ancient history as I discovered by consulting the Oxford English Dictionary. Originating with post-classical Latin and the Old English “aelmyssen” the word means “charitable relief given to the poor or needy” usually in the form of money or food. The alms boxes were also often simply called poor boxes.

The probable reason December 26th was chosen for opening the alms boxes goes back even further in history. December 26th is the Feast Day of St. Stephen, the first Christian martyr, whose story is told in the Acts of the Apostles.

He was appointed one of seven deacons chosen to distribute food to the poor. But his sermons were denounced as blasphemy by the Jewish authorities and he was stoned to death. The popular Christmas carol “Good King Wenceslas” recalls St. Stephen’s example of charitable giving. The Bohemian King and his servant set out on a snowy St. Stephen’s Day to take food and wine and firewood to a poor peasant. The carol ends with an exhortation to all Christians to share their blessings with the poor:

Therefore, Christian men, be sure,
Wealth or rank possessing,
Ye who now will bless the poor,
Shall yourselves find blessing.

In one of the earliest literary references to Boxing Day traditions, Samuel Pepys wrote in his famous diary on December 19th 1663:

“Thence by coach to my shoemaker’s and paid all there, and gave something to the boys’ box against Christmas.”

In the early 18th century Jonathan Swift grumbled about the amount of giving required of him:

“I shall be undone here with Christmas boxes. The rogues of the coffee-house have raised their tax, every one giving a crown, and I gave mine for shame, besides a great many half-crowns to great men’s porters.”

But according to the Oxford English Dictionary the first mention of Boxing Day in literature was indeed by Dickens. In The Pickwick Papers we find the rather obscure reference: “no man ever talked in poetry ‘cept a beadle on boxin’ day.” A beadle was a parish official in charge of dispensing charity, though Dickens’ most famous beadle, Mr. Bumble who oversees the orphanage in Oliver Twist, is hardly a model of charity.

By Dickens’ day December 26th had evolved to a holiday when the “wealth or rank possessing” gave boxes of leftover foods and money to their servants. Servants and other lowly workers were required to work on Christmas Day so Boxing Day was their own chance to relax and celebrate. This led inevitably to complaints by censorious Victorians about the lower orders drinking and carousing in an unseemly manner!

Although boxing itself has nothing to do with it, other sports are traditional on Boxing Day. In the countryside there are annual fox hunting meets (often accompanied by animal rights protests) and horse racing. We can be glad that another horse related tradition has fallen by the wayside, the medieval practice of horse bleeding described in this poem by Thomas Naogeorgus:

Then followeth Saint Stephens day, whereon doth every man
His horses jaunt and course abroad as swiftly as he can
Until they doe extremely sweate, and than they let them blood
For this being done upon this day, they say doth do them good
And keeps them from all maladies and sickness through the yeare.

Armchair sportsmen watch soccer matches while the more adventurous participate in swimming Dips in the sea, sometimes in fancy dress. Modern times have also seen the rise of the sport of shopping. Boxing Day is the busiest shopping day of the year in England, with mobs of shoppers stampeding into stores as Americans do on Black Friday.

A recent movement to return Boxing Day to the spirit of St. Stephen encourages charitable giving and we can all drink to that, another traditional Boxing Day activity along with dining on the Christmas leftovers. My personal favorite activity is reading whatever books I got as Christmas gifts! 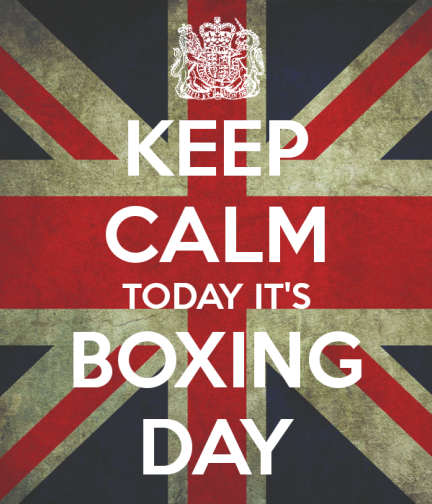 Note: An edited version of this post with links to library resources was published on MCPL’s Shout Out Blog.

One thought on “What is Boxing Day?”