Our boat slowed and began to circle the little island in the lake. Then over the loudspeaker came the voice of our captain, George, reciting the W. B. Yeats poem The Lake Isle of Innisfree. We were circling that very island. We were in Yeats country, “the land of heart’s desire” around Sligo in the west of Ireland. This was just one of the magical moments we experienced in my first visit to my paternal grandparents’ country. And George was just one of the marvelous characters we met who made Irish history and culture come alive. A tall patrician looking man, a former psychiatric nurse, he retired, bought a boat, The Rose of Innisfree, and spent his days on the water sharing his love of Yeats with visitors. To hear Yeats’ words spoken in his soft Irish accent in the midst of the beautiful Irish landscape was a world away from the academic setting in which I had first encountered the poet. I had studied the poems of Yeats’ Modernist period, those written after the horrors of the First World War had extinguished late nineteenth century Romanticism. Yeats’ lyrical early work on the beauties of the Sligo landscape, steeped in Irish folk mythology, gave way to more complex images of a broken, suffering world. Poems like The Second Coming:

Turning and turning in the widening gyre
The falcon cannot hear the falconer;
Things fall apart; the centre cannot hold;
Mere anarchy is loosed upon the world..

But life has changed my relationship to this poet into a more personal one. My family naturally associated my redheaded son Patrick Hanrahan with Red Hanrahan, the hero of some of Yeats’ stories and poems. I gave him my college copy of Yeats’ poems and encouraged him to read Red Hanrahan’s Song About Ireland. After Patrick died we found the book in his apartment, spine split and falling apart as though he really had been reading it. My sister came to the funeral bringing with her a first edition of Yeats’ Stories of Red Hanrahan, part of a library of first editions inherited by her husband. She opened it at random to browse for a suitable quotation. The book fell open at the perfect page, a passage reflecting Patrick’s love of music and suggestive of a leave taking from this world.

Hanrahan had begun to climb the mountain then, and he gave over singing … Suddenly he heard a faint music, a music that had more laughter in it and more crying than all the music of this world. And his heart rose when he heard that, and he began to laugh out loud, for he knew that music was made by some who had a beauty and a greatness beyond the people of this world.

My sister read it at the funeral and we chose the words “all the music of this world” for his grave. Some years later our family had a happier reason to come together, my daughter Ruth’s wedding to Andrew Callahan. She asked me for suggestions for a reading. Who else would I turn to but Yeats? I chose He wishes for the Cloths of Heaven, which was beautifully read by her Irish-American father-in-law.

So for me a visit to the great man’s grave was more of a personal spiritual pilgrimage than a stop on the tourist trail. Yeats is buried at St. Columba’s, the Church of Ireland parish church in Drumcliffe, a village just north of Sligo. We stayed at a Lodge named for the poet a short walk away from the churchyard. From our window we had a view of Ben Bulben, at least when it wasn’t shrouded in mist, a mountain important in Irish mythology. In one of his last poems, Under Ben Bulben, Yeats laid out very specific instructions for his burial:

In Drumcliff churchyard Yeats is laid.
An ancestor was rector there
Long years ago, a church stands near,
By the road an ancient cross,
No marble, no conventional phrase:
On limestone quarried on the spot
By his command these words are cut:

Cast a cold eye
On life, on death,
Horseman, pass by!

In the dusk of evening we slipped away from the Lodge and walked over to the churchyard. No one else was there, it was quiet and peaceful. Yeats’ grave was exactly as he wished, plain and solemn and dignified. And forever in my mind associated with the memory of my son. 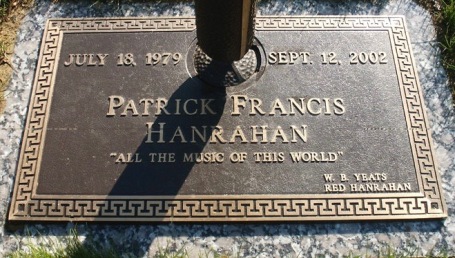 The next day we learned what the ordinary people of Sligo had thought of the literary genius in their midst. We headed to Rosses Point to take a boat to the uninhabited island of Inishmurray. Rosses Point was one of Yeats’ favorite places where he liked to stay when he came to Sligo. According to Daryl Ewing, our boat captain, the locals thought he was completely mad. A fixation we would now call OCD gave him a most peculiar gait. He couldn’t walk on the cracks in the pavement, which was very difficult on cobbled streets. As he hopped about avoiding the cracks he was also fixated on having to tap his cane twice after every two steps. His manner was so strange that people laughed openly and children threw stones at him. Daryl’s grandmother worked at the hotel where Yeats stayed. She would take his meals up to his room, but very often he had the “do not disturb” sign on his door for hours. He could be heard inside mumbling in a singsong voice. The hotel staff thought he was praying, but he was probably composing his poetry aloud.

Not all the expeditions on our tour were focused on Yeats, but there was an echo of him to be found everywhere, so deeply is he connected to the Sligo area. One day we stopped at the Glencar Waterfall, which inspired Yeats’ early poem The Stolen Child. Written at the time Yeats was collecting Irish folk tales for publication, the poem tells of faeries beguiling away a human child, a fear common among the Irish people at the time.

Where the wandering water gushes

From the hills above Glencar…
Leaning softly out
From ferns that drop their tears
Over the young streams.

Come away O human child!
To the waters and the wild
With a faery, hand in hand,
For the world’s more full of weeping than you can understand.

Our guide passed the text around and we each read a verse of the poem as the water gushed behind us, the wind rustled the ferns, and our driver played a melancholy tune on his Irish tin whistle. Another magical moment in Yeats country.

For information about tours of Yeats country and other west of Ireland destinations please visit Wild West Irish Tours.

6 thoughts on “In Yeats Country”