On My Bookshelf – Swallows and Amazons

Posted on July 1, 2017 by dispatchesfromtheformernewworld 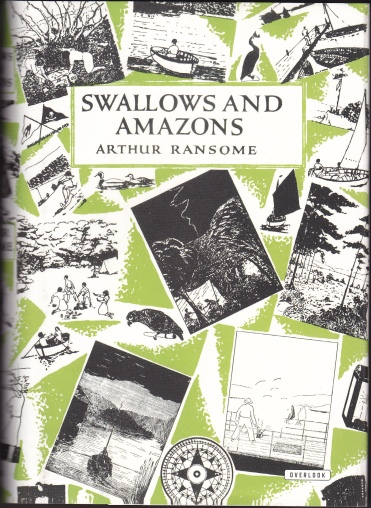 My favorite childhood book was never on my own childhood bookshelf. I borrowed Swallows and Amazons by Arthur Ransome from my local library and enjoyed it so much that in subsequent weeks I checked out all the other books in the series. I do own a copy now, though it is currently on loan to my grandsons. This year was our fourth spending a week together at Deep Creek Lake in Maryland. I’m hoping the lake experience will draw them into this adventure set at another lake, Coniston Water in England’s Lake District.

The story of the four Walker children, John, Susan, Titty, and Roger, their sailboat Swallow, and rivalry with the Amazon pirates Nancy and Peggy, is every child’s dream of getting away from their parents and living an adventure of their own. The Walker parents actually give permission for the children to camp out by themselves on an uninhabited island in the lake. But the fierce Amazon girls lay claim to the land and besiege the island. Eventually the rivals declare a truce and join forces to investigate mysterious happenings in the adult world. Their adventures play out against the magnificent backdrop of the Lake District landscape and way of life. Reading these books that summer I fell in love with the Lake District and dreamed of going there myself one day. 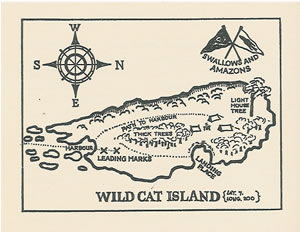 My dream came true the summer I turned sixteen when my parents gave permission for me to go on a hiking holiday there with three friends. I knew I was lucky, as two other friends were not allowed to go. We took a bus from London to Keswick and set off for a week of strenuous hiking (or fell-walking as it is called in the Lakes), staying in a different Youth Hostel each night. And we did have adventures! One late afternoon as we hiked our way towards Black Sail, the most remote Youth Hostel in England, the sky went 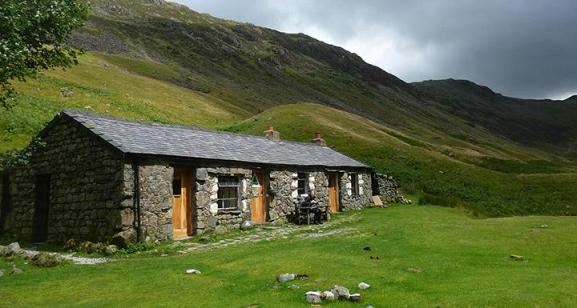 dark and we were caught in a violent thunderstorm. We were alone on the high fells and unable to read our Ordnance Survey map in the lashing rain. We knew we had to cross a small stream ahead but when we reached it the storm had turned it into a raging torrent. There was no choice but to wade across clinging to rocks with water up to our knees. Somehow we made it to Black Sail, a crumbling stone cottage with rain dripping through the roof onto our camp beds. We learned that, other than a primitive toilet, the bathroom was the nearby stream, which we shared with the sheep. You haven’t lived until you’ve brushed your teeth while being nudged by a sheep. In the morning we wrapped our feet in plastic bags before putting on our sodden hiking boots and setting off once more. At the time we didn’t dwell on how close we had come to being lost overnight on the fells. Inexperienced hikers often have to be rescued by helicopter when they become lost or trapped by the fast-descending mists.

Swallows and Amazons is such a quintessentially English story, with its English setting and typically English middle-class family, that it is startling to discover that Arthur Ransome was actually inspired by a family from Aleppo, Syria. He met the Anglo-Armenian Altouyan family when they were on holiday in the Lake District in 1928. 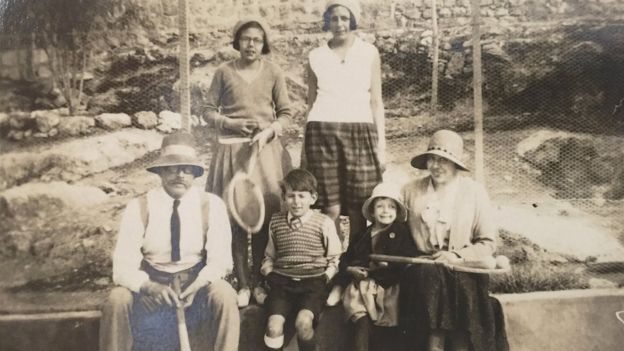 Ransome took the family under his wing, helped them buy a boat named Swallow, and taught the four children to sail. Taqui, Susan, Mavis (nicknamed Titty), and Roger were the models for the Walker children though Taqui, a girl, became John. The children’s mother, Dora, had grown up on the shores of Coniston Water, but now the family lived in Syria where her Armenian husband ran a hospital. The children would grow up to have mixed feelings about their literary connections, but when the family was expelled from Syria after the Suez crisis they settled in the Lake District. 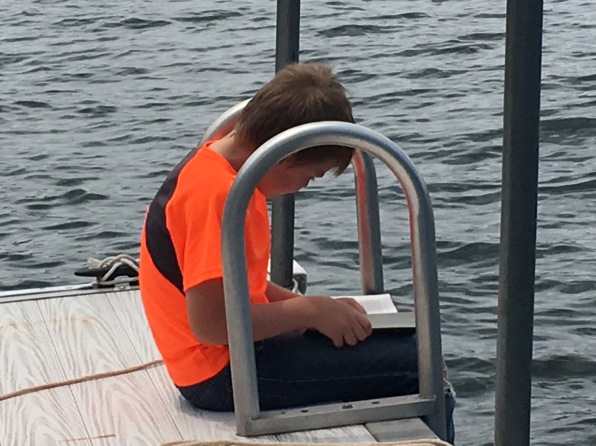 On our summer visits to Deep Creek I can’t give my grandsons the full Swallows and Amazons experience. We don’t have a sailboat, we rent a pontoon boat for a couple of days. We don’t look out to the bare rugged fells of the Lake District but to the gently rolling hills and woodland of Maryland. There are no uninhabited islands to make their own or pirate girls to battle. But we’ve had some adventures nevertheless. This summer we had a close encounter with a bear.

We ate dinner one evening on the outside terrace of a restaurant, a narrow strip of lawn with some children’s play equipment between us and the water. Suddenly we heard shouts and screams and saw a large black bear run across the lawn and disappear into the woods. By the time I scrambled for my phone to take a photo he was gone. Or that’s what we thought. At the end of the meal the boys wanted to play in the play area but we noticed it was now deserted. The restaurant manager had ordered everyone out of the area because the bear was still a few feet away in the woods. But we had to walk across the lawn to get to the dock where our boat was moored. We took a chance and set off. As we walked onto the dock we could see the bear watching us. My husband and sister were some way behind. As they crossed the lawn the bear came right in front of them cutting off their path to the dock. They backed up and waited for the bear to move on before they made a dash for it. Like my long-ago brush with danger in the Lake District, it was only afterwards that we realized what a chance we had taken and how lucky we were.

I’ve reread Swallows and Amazons several times as an adult and it never disappoints. But I’ve revisited the Lake District only once since that teenage hiking trip. I hope to go there again some day. Perhaps even to Black Sail. On the Youth Hostel Association’s website it looks as though the place has had a smart remodel. No more leaking roof and washing in the stream. But it is still two and a half miles of rugged mountain hiking from the nearest road.

This entry was posted in On My Bookshelf and tagged Autobiography, Books, England, Travel. Bookmark the permalink.