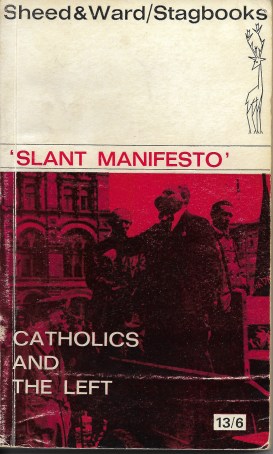 Subtitled Catholics and the Left this worn little paperback sits on my bookshelf like a relic of another age. It was a time when English Catholics looked to Marxist thought to inspire a full expression of their faith. Released in 1966 by the Catholic publishers Sheed and Ward, Slant Manifesto is a compilation of writings by the founders of Slant. Slant was a journal published from 1964 to 1970 by a group of Catholic Cambridge undergraduates and Dominican priests, many of whom went on to become leading intellectuals and theologians. In the introduction to the Manifesto Neil Middleton explains that the group “is engaged in the exploration of the idea that Christian commitment at the moment carries with it the obligation to be socialist.” A sample of the chapter headings is a rough guide to the scope of Slant’s concerns:

Christians Against Capitalism
The Failure of the Christian Revolution
The Church, Sacrament of a Socialist Society

The context for these ideas was the radical rethinking of the practice of the Catholic faith that followed the Second Vatican Council called by Pope John XXIII. And in England the 1964 election of a Labour government under Prime Minister Harold Wilson was a moment of triumph for socialist ideals.

By the time I encountered Slant ideas as a student at the University of Sussex I was primed to find them inspiring. I grew up in a home where Catholic faith and Socialist politics were the twin pillars of a moral life. My father often said that “Jesus Christ was the first socialist.” Socialism, he believed, was the best political system to realize the gospel mission of caring for the poor, feeding the hungry, and healing the sick. My father served as a Labour member of the Dagenham Council during the 1950’s and had higher political ambitions before he had to resign for health reasons. I recently found a collection of papers from his time on the Council, discovering that in those days Labour Party members addressed each other as Comrade. A distant age, indeed.

I met some of the Dominican priests active in the Slant movement through Howard House, the Catholic Chaplaincy at the University of Sussex. Among them was Father Herbert McCabe, one of the founding members of Slant. On his death in 2001 his obituary in the Guardian noted that “theology and philosophy in these islands have lost one of their most distinctive and radical controversial voices.” His thought was influenced by Thomas Aquinas, Wittgenstein, and Marx and he happily embraced the label “Catholic Marxist.” I knew a less serious side of Father McCabe. He was a charming and entertaining conversationalist. After I moved to Berkeley, California I reconnected with Father Bernard Cranor, an American Dominican I also knew from Sussex days. When Father McCabe visited from England the two priests came over to my apartment for the evening. Suffice it to say that much whiskey was drunk, Irish ballads were sung, and it was the only time my neighbors complained about noise. They were not mollified by my explanation that we were discussing theology!

Dominicans were also involved in one of the most memorable experiences of my student days. It was an “only in the 1960’s” kind of thing. A friend and I were invited to be “maids of honor” at the ordination ceremony for two Dominican priests in Oxford. My mother got busy on her treadle sewing machine and made me a dress for the occasion, a black chiffon floaty thing with elaborate ruffles. We didn’t really have a part in the ceremony; that surely would have been going too far even for the 60’s. I do remember the solemnity of the service, the priests lying prostrate before the altar as they made their vows. Afterwards we headed to the river for that quintessential Oxford experience, punting. I had never done it before and when it came my turn to wield the pole I hung onto it too long and fell into the river. I leave it to your imagination how limp and bedraggled my chiffon frock looked as my friends hauled me out of the water. Thankfully there was no Instagram in those days or I would surely have been humiliated by the photos. But I was unfazed. A chivalrous priest, who I was secretly in love with of course, wrapped me in his long black cloak for the walk back to our digs.

All these memories rush back as I leaf through the pages of Slant Manifesto and see all the pencil underlinings and margin notations I made back in the day. I mourn my former idealistic self, the one who highlighted these statements:

“the opposed (to capitalism) version of society is, simply, that of community – the view that men are most Christlike when they are cooperating and not competing, when they are bound together, not fragments.”

“only the idea of a socialist society can give content and meaning to a Christian belief in the coming kingdom which Christ will establish at his return.”

Today in 21st century America, where much of Christianity has embraced the moral black hole of Trumpism, how far we are from the ideals of my youth.