Witchfinders – no, not characters in our contemporary political drama. But it could be that hearing cries of “Witch Hunt” almost every day for two years was what led me to this particular book on my shelf.  Witchfinders by Malcolm Gaskill is a mesmerizing account of a seventeenth century English witch hunt, one of the most vicious on record, led by two Essex gentlemen, Matthew Hopkins and John Stearne. Hopkins earned the title Witchfinder General and became something of a folk hero in the villages and towns of East Anglia. Through torture and intimidation he extracted confessions and false witness accounts from terrified people, mostly women, arresting a total of 250 presumed witches. Over a hundred were publicly hanged.

The medieval belief in witchcraft lingered on after the Reformation. Witchcraft became associated with Catholicism and thus witch trials played a role in demonizing Catholics and enforcing religious change. King James I himself was obsessed with witchcraft. While still King of Scotland he participated in the interrogation of suspected witches in North Berwick. And in 1597 he published a learned treatise on the subject, Daemonologie. It was republished in London in 1603, the year he succeeded Elizabeth I, and was widely read as a window into the mind of the new king. He even advocated the so-called “swimming test” as a means of judging the guilt or innocence of accused witches.

Hopkins and Stearne’s notorious witch hunt began in 1645 during the Civil War between the forces of James’s son Charles I and the Puritan Parliamentarians. England was racked by war, religious conflict, an outbreak of the plague, and economic hardship, a state of turmoil ripe for the creation of scapegoats. East Anglia, as the center of the Puritan revolution, was not an unexpected locale for a renewed frenzy about witches. Oliver Cromwell himself, who came from Huntingdonshire, had a family connection to witch hunts. In 1593 three witches were executed at Huntingdon for the murder of his grandfather’s second wife. Hopkins and Stearne were both strict Puritans who saw demons and idolators everywhere and determined to eradicate them by any means necessary.

Their campaign began with a simple magistrate’s order issued on March 21st 1645 giving Stearne a warrant “for the searching of such persons as I should nominate.” The pair took full advantage of this overly broad permission. Their first victim was Elizabeth Clarke of Manningtree, an elderly widow accused by her neighbors of causing the death of two cows and a baby. All had fallen ill after passing by her home; ridiculously that was enough evidence to arrest her. Her case followed a pattern that would be repeated many times over the ensuing months: searching, watching, and interrogating.

The Searchers are the most confounding characters in this drama. They were women who worked with Hopkins and Stearne to do what they could not, search the intimate parts of a woman’s body for signs of teats supposedly used for suckling the devil or his familiars. Four women conducted the search of Elizabeth Clarke, finding three teats in her genital area which they deemed unnatural. What elderly woman, one wonders, could pass this test? As the inhabitant of an aging woman’s body myself I have enough moles and bumps of dubious character scattered about that I would surely have been found suspect. Once the Searchers confirmed the teats, the Watchers took over. Two men were appointed to sit up all night with the accused in her home waiting for the familiars, or imps, to appear. This went on for several nights with no result, imps presumably being more difficult to conjure than teats on a woman’s body. But on the next night, determined to get results, Hopkins and Stearne themselves joined the watch and began the interrogation.

“Bess,” asked Hopkins, “Hath the Devil had the use of your body?” By this time no doubt sleep deprived and anxious for the ordeal to be over, Clarke replied, “It is true.” She went on, with a flash of defiance, to describe the Devil as “A tall, proper, black haired gentleman, a properer man than your selfe.” She claimed to have had “carnal copulation” with him for seven years. Next some animals appeared that could have been household pets, a cat, a dog, a ferret, and a toad, but they were quickly identified as familiars. The Witchfinders had all they needed. In short order Elizabeth Clarke was tried and convicted. She was executed in the Essex town of Chelmsford along with fourteen other supposed witches, so frail that she had to be lifted into the noose. Cheering crowds celebrated their deaths. This was just the beginning of a two year reign of terror in East Anglia. 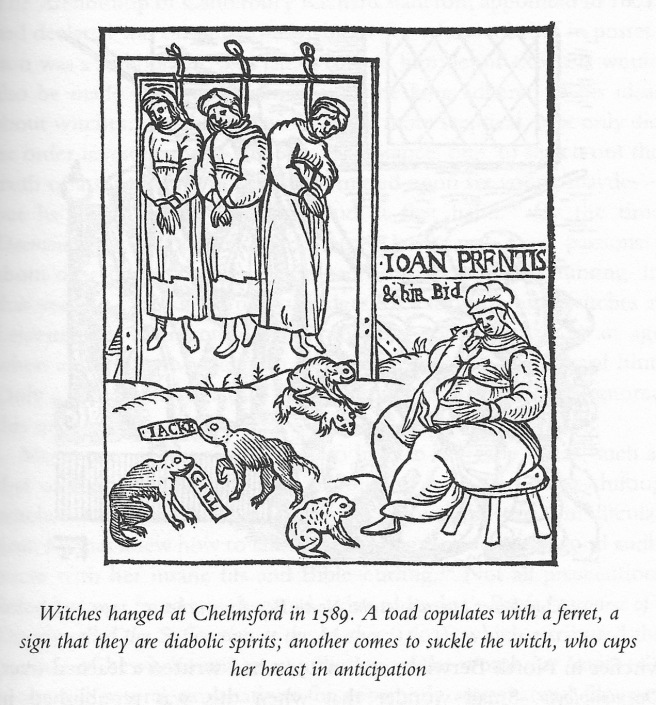 But though the Witchfinders acted out a popular hysteria, it is important to note, as Gaskill makes clear, that there were dissenters. Arthur Wilson, a spectator at Clarke’s trial, was disgusted by the proceedings. He wrote:

I could find nothing in the Evidence that did sway me to thinke them other then poore, mallenchollie Envious, mischevous, ill-disposed, ill-dieted Constitutions, whose fancies working by grosse fumes and vapors might make the imagination readie to take any impression.

When I first read Witchfinders years ago I marveled at the ridiculous things people were persuaded to believe in those times. I don’t find it so strange any more. We live in a similar age of conflict over politics and religion, where immigrants and Muslims are the new witches blamed for all our ills, and where social media can persuade people to believe that a presidential candidate is running a child sex trafficking ring in the basement of a pizza restaurant. Our own Witchfinders are active spreading “grosse fumes and vapors” on the internet 24/7 and who knows where they might point the finger next? That is more frightening than any witch.

One thought on “On My Bookshelf – Witchfinders”