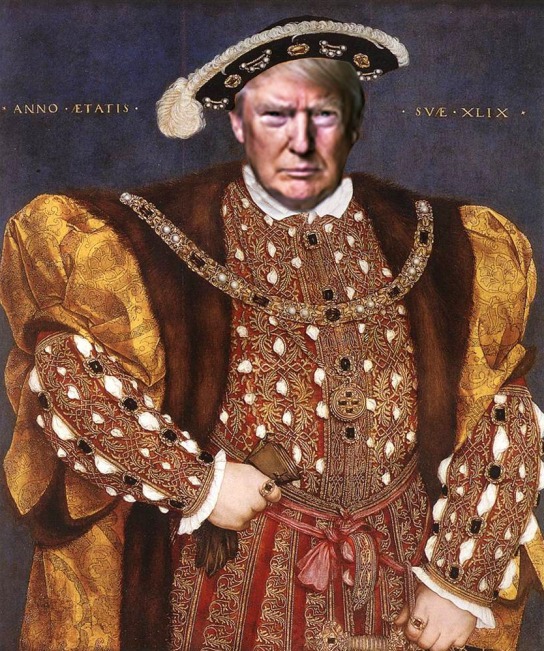 Literary and historical analogies to the new administration in Washington have been flying as fast and indiscriminately as the hastily scribbled Executive Orders fly from the Oval Office desk. 1984, Brave New World, The Plot Against America, the Soviet Union, Nazi Germany (you know, the ones who perpetrated a Holocaust against everybody), a banana republic, a tin-pot dictatorship, the Fall of Rome. Pick your favorite dystopia. All have had their moment as the metaphor du jour. But since the shocking events of this past week and the rise of Stephen Bannon as the power behind the Throne I can’t help thinking of the Tudors. Henry VIII and his henchman Thomas Cromwell, the protagonists of Hilary Mantel’s brilliant novels Wolf Hall and Bring Up the Bodies, were the Trump and Bannon of their day.

Consider Henry VIII. A childish man by all accounts, puffed up with pride, boastful, and given to uncontrollable rages and sulks when he didn’t get his way. Slim and handsome in his youth, hard living turned him gross and mean looking. A womanizer married six times, twice to immigrants, Henry was used to women succumbing to his power, which was why Anne Boleyn drove him so crazy. To feed his own desires he was willing to tear everything down, the Church included, despite the title bestowed on him by the Pope, Defender of the Faith. He was a user not a lover. When Anne didn’t give him the son he wanted it was off with her head. Even before she was executed he was sniffing out new prey. At Wolf Hall he met the naïve young woman whose ambitious family’s scheming pushed her into his path as a suitable new wife. Jane Seymour gave him the longed for son and promptly died. Henry rampaged through the next three wives an increasingly unstable, raging megalomaniac. Power was his coinage, used only for his own selfish ends. As historian David Starkey describes it, Henry was a bully “engaged in a brutal campaign to eliminate foes both real and imagined.”

Thomas Cromwell was Henry’s chief enabler during the most tumultuous years of his reign. The ruthless upstart from the streets of London, pug nosed and meaty faced, had an agenda of his own. (Mark Rylance as Cromwell in the TV version of Wolf Hall was really too hollow-cheeked and handsome for the role, but his superior acting skills carried the day. Bannon is more of a Cromwell look-alike). Henry had no real interest in changing the doctrines of the Church; he was a traditional Catholic. For him the break with Rome was all about meeting his own needs to get a divorce and marry Anne Boleyn. But Cromwell was a Protestant, an adherent of the “new religion.” Meeting the King’s needs would advance the cause of Protestantism and break the power of the clergy in England. Cromwell took an axe to the establishment, overseeing the Dissolution of the Monasteries, while Henry made no objection to filling the Crown’s coffers with confiscated monastic wealth. Henry was volatile and unmoored; Cromwell disciplined, scheming, and utterly ruthless.

Now in Trump Hall, otherwise known as the White House, we have a childish, braggadocios President in need of constant affirmation, obsessed with his own crowd numbers and polls. He has no core beliefs, no moral center. He would, and did, do anything and say anything to win. He uses and discards women without compunction. Like Henry VIII everything is all about him and his needs. Most dangerously, he also has a Cromwell at his side. Like Cromwell Stephen Bannon has his own agenda. It is there for all to see on his Breitbart website. He too wants to take an axe to the establishment, to engender chaos, and to destroy the free press, an institution which in Thomas Jefferson’s words “is essential to the security of the state.” His “new religion” is the cause of isolationist white nationalism. Trump has no more understanding or interest in this than Henry had in Protestantism. So long as his Cromwell keeps him in power and feeds his ego anything goes. Even facts. As Thomas Cromwell says in Wolf Hall:

“It is the absence of facts that frightens people: the gap you open, into which they pour their fears, fantasies, desires.”

In history, of course, Cromwell eventually became another of Henry’s victims, dragged to the execution block in his turn when he failed to meet the King’s needs. After Jane Seymour’s death Cromwell arranged a marriage with Anne of Cleves, persuading Henry of her beauty with a flattering portrait because he wanted to forge an alliance with the Protestant states of Europe. His agenda again. But Henry found the unfortunate Anne ugly and turned on Cromwell in a vengeful rage.

We can only wonder what will happen at Trump Hall if and when Bannon’s scheming fails to please, sinking Trump’s poll numbers to a very ugly place.

One thought on “Trump Hall”