On My Bookshelf – The Domesday Book

Posted on February 17, 2017 by dispatchesfromtheformernewworld 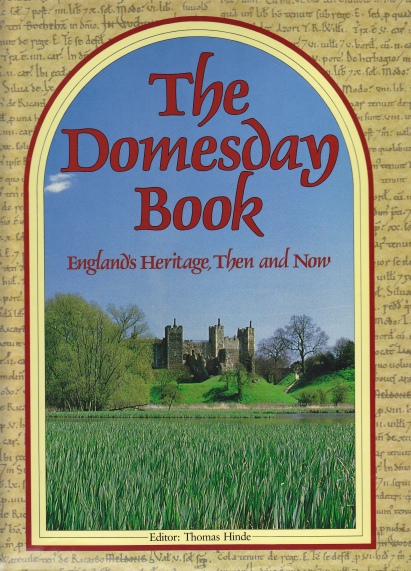 Quite why my eyes should rest on The Domesday Book out of all my history books this morning I can’t quite say. But perhaps it had something to do with the fact that yesterday I inadvertently ended up watching the Press Conference/Reality Show of our Dear Leader. Perhaps it was his casual reference to nuclear holocaust and joking threat to “shoot that (Russian) ship that’s 30 miles offshore right out of the water.” Perhaps it was the fact that The Domesday Book records a civilization at the moment of its demise. In the years after 1066 the Anglo-Saxons mounted a heroic resistance to their Norman conquerors but in effect Anglo-Saxon England was over. William the Conqueror gave up his early attempts to learn English and Norman French became the language of the ruling class. That’s why we still say beef for the Anglo-Saxon cow once it is served at table. Meanwhile Latin replaced English as the language of official documents. The Domesday Book was written in a heavily abbreviated 11th century clerical Latin which posed a major challenge to readers down the centuries. My book, which contains representative entries for every county in England, is in a modern translation dating to the 1960’s.

The purpose of The Domesday Book was to exert William’s authority over his new kingdom by recording the ownership and resources of every plot of land down to the smallest hut and pigsty. This information was then used to collect the royal taxes and the payments and services due to the new Norman overlords. The survey compared conditions in 1086 with those at the time of the Conquest so it forms a record of the changes wrought in England in just twenty years, for instance we can see the ownership names change from Anglo-Saxon to Norman. For the Anglo-Saxons the book represented subjugation to a foreign conqueror, but for historians it is an amazing gift, a snapshot of the moment Anglo-Saxon England became Norman. In its pages we find a lost world described in minute detail. As the Anglo-Saxon Chronicler wrote:

“…there was not a single hide or yard of land, nor indeed an ox nor a cow nor a pig left out and not entered in this record.” 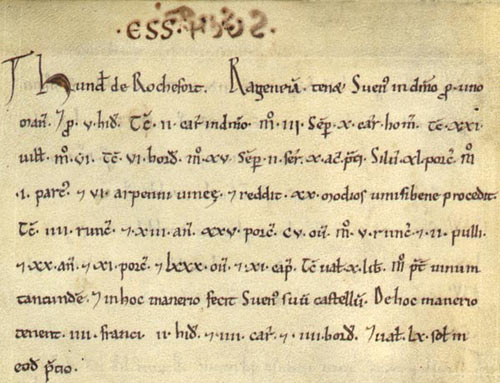 Part of the Essex section of The Domesday Book

The pleasure of browsing the book today is to find places you know and discover what they were like in the late 11th century. This is how my county of Essex is described in the introduction to its chapter:

“Domesday Essex was probably not the happiest place to live…we see evidence of what one historian has called “little revolutions,” and of an increase of the unfree population at the expense of the relatively free. By 1086 only 7% of the residents were freemen, while the subservient smallholders had grown to nearly half the total. Many of the new smallholders would have been expected to undertake slaves’ work. In the process of Norman colonization, the Saxon men of Essex lost not only their lands but also much of their liberty. Life may have been better for the nearly 50,000 sheep and the 13,171 pigs.”

Among the familiar Essex place names recorded here is Stanesteda, now called Stansted and the site of an international airport. In 1086 the tenant was named Hubert and the landowner Robert Malet. The land boasted 2 mills, 8 beehives, and 26 goats. In West Ham, home of the famous football team, Ranulf Peverel was the tenant under landowner Robert Gernan with 9 mills, 3 cobs (horses), 6 cows with calves, and 30 goats. Most of Essex was woodland and coastal marshlands divided into rural smallholdings like these, but there was one large town. Colchester originated with a major Roman town called Camulodunum which was built on the site of an Iron Age fortified settlement. In 1086, now named Colecestra, the land was owned by a collection of Bishops, Abbots, and Norman lords. 400 houses and 2 churches were recorded, along with a court, 4 mills, and 4 sesters of honey. 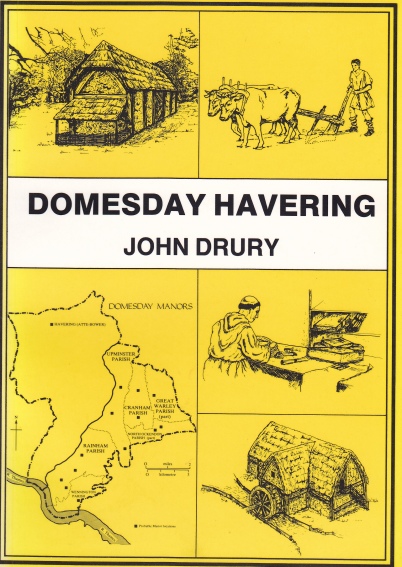 Most of the entries in my book are in synopsis form so I can’t find much here about the place where I grew up. But on one of my visits home I picked up a publication of the local Historical Society, Domesday Havering by John Drury. My home, Chadwell Heath, part of the Essex suburbs sprawling out of London along the A12, was once part of the Domesday manor of Havering-atte-Bower. It was one of 31 manors in Essex owned directly by King William. The “atte-Bower” suffix means it was the site of a royal palace, though the building would have been quite modest, not at all our image of a palace. The King gave three nearby manors at Upminster, Cranham, and Rainham, all familiar places from my youth, to Bishop Odo of Bayeux as reward for his help in planning the invasion of England. And yes, Odo was the person who commissioned the famous Bayeux Tapestry, where he is shown conferring with the King.

Chadwell Heath itself was uninhabited royal forest in the southern part of the manor of Havering-atte-Bower. In Domesday Havering we learn that the manor measured 10 hides at 480 acres a hide including woodland for 500 pigs, meadow, forest, and marshland. The population consisted of 40 villagers, 41 smallholders, 6 slaves, and 3 freemen. Of the freemen Robert son of Corbucion and Hugh de Montfort are chided for not having paid their dues since they were given the land. Livestock were 2 cobs, 10 cattle, 160 pigs, and 269 sheep. There was one water mill and 42 ploughs. The villagers and smallholders held small plots of land to plough for themselves and were required to work one to three days for their Lord. The slaves had no land of their own and worked exclusively for the Lord as ploughmen or shepherds. All the villagers would have brought their grain to the Lord’s mill for grinding. In addition to the thatched manor house the buildings were limited to small windowless huts where the peasants lived alongside their animals. 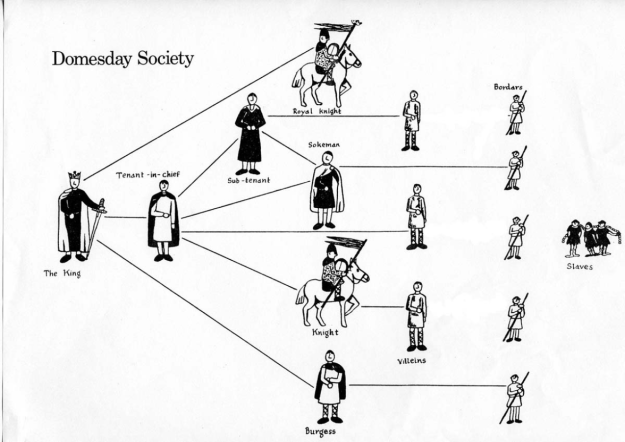 Taken together the bare facts of the Domesday survey record a hard way of life with the once proud, free Anglo-Saxons robbed of their lands and reduced to servitude. The name Domesday Book came from the Anglo-Saxons who compared the survey to the Last Judgment or Doomsday in the Bible when the deeds of Christians written in the Book of Life would be placed before God for judgment. The Domesday Book is a searing record of their humiliation and defeat.

What chapter are we writing now in the Book of Life, the Book of History? We must all hope it will not justify the title Domesday.

This entry was posted in On My Bookshelf and tagged Books, England, History. Bookmark the permalink.